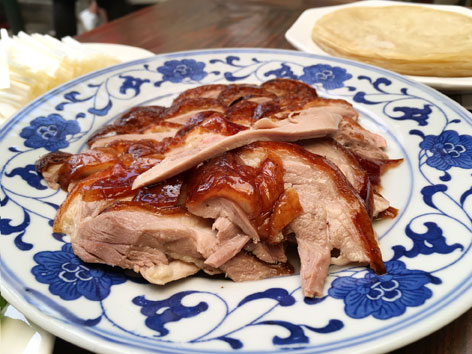 What: You can’t escape Peking duck (Beijing kaoya) in the city that bears its name (or did until authorities officially replaced this archaic mispronunciation with “Beijing” in 1979). Restaurants serving the Chinese capital’s most famous meal can be found in every shopping mall and public plaza, while souvenir shops in airports and train stations feature rows of ready-made ducks in vacuum-packed plastic bags. Peking duck needs no introduction…but we’ll happily give you one anyway.

On the surface, it all seems so simple. The roasted duck meat is served thinly sliced on a plate, with the crispy brown skin on top, smooth layer of fat, and soft, moist dark meat below. Diners wrap the slices in a thin steamed pancake (feel free to use your hands for that part) and add garnishes and sauces as they like; typically these include thin slices of cucumbers, green onions, and a sweet bean paste (similar, but a bit more tart, than the plum sauce you might have tried in your local Chinese restaurant). But the real art of Peking duck lies in the roasting, with each restaurant boasting its own secret method, varying the time, temperature, and even the kind of wood used to fuel the oven–each element coming together to give the duck its signature flavor and textures.

Beijing’s most famous local dish is in fact very rarely eaten by locals: Its complicated preparation method prevented Peking duck, originally a meal for emperors and the elite, from becoming a home-cooked dish. Beijingers are most likely to go out for a duck dinner on a special, celebratory occasion…or when hosting out-of-town guests.

Where: Without a doubt, our go-to place for this is Liqun Roast Duck (利群烤鸭, 11 Bei Xiangfeng Hutong, 北翔凤胡同11号, map). A decade ago, this was the city’s hottest spot for Peking duck, as shown by the fading photos of Hong Kong movie stars and European diplomats lining the entryway. While glitzier new eateries have since stolen its thunder, Liqun still draws a steady stream of loyal diners. Hidden away in an old courtyard home, the place may be a bit cramped and rough around the edges, but that just adds to its charm. An incense-like scent from the wood-burning ovens greets you as you stoop down into the smoke-blackened entrance, and shouting cooks weave between tables carrying plump ducks from the storeroom to the kitchen. It’s truly a timeless, one-of-a-kind Beijing experience.

Order: A range of set meals are available, but if you’re there for the duck, you’ll have three options. The simplest will get you two plates of smoky, flavorful, tender duck meat, along with the requisite pancakes, veggies, and sauce, for 240 RMB. (For those of you who like a good show, your duck can be carved tableside on request.) An additional 20 RMB each will get you a bowl of duck soup and a plate of the “leftovers” (legs, wings, and head), deep-fried and salted. We recommend going the simpler route, though–the soup is a little plain, and while the fried extras are delicious, it can be a struggle to find much meat left on the bones

Alternatively: Beijing’s oldest and most famous place for duck is Quanjude (全聚德, 9 Shuaifu Yuan Hutong, 帅府园胡同9号, map), with several locations across the city. The experience is definitely touristy, with each duck coming with a souvenir certificate of authenticity and the option of a group photo, but with nearly 150 years of duck-cooking experience, the folks here definitely know what they’re doing.

In recent years, Da Dong (大董, 301 Wangfujing Dajie,王府井大街301号, map) has made a name for itself for its supposedly low-fat cooking methods and creative reimagining of Peking duck and other traditional dishes. You can experiment with a surprising range of vegetables, fruits, and sauces to grace your duck pancake, while sitting among a similarly surprising range of fellow diners, from scruffy backpackers to glittering well-to-do expats and buttoned-down Chinese government officials. Worth a try.