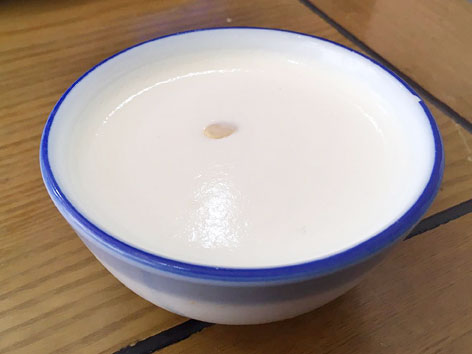 What: China has a complicated relationship with all things dairy. Milk has never been a part of the traditional diet, and even naming dairy products here has proven to be a challenge. Nailao (奶酪), for instance, refers to a kind of yogurt or milk custard, but you’ll often hear this word used to mean “cheese” as well. The term entered the Beijing lexicon when the Manchus conquered China in the 1700s and brought their local yogurt with them, from the frigid northern steppes into the imperial palace. Originally made with goat’s milk and rice wine, for most of its history nailao remained a rare treat for special occasions or a sign of sophistication among the upper classes. Even today, stores featuring traditional nailao are few and far between, making a visit to one all the more of a unique experience.

The texture and taste are probably not quite what you’re used to from the yogurt back home. Solid and jiggly, but cutting cleanly on the edge of a spoon, nailao for many will bring back childhood memories of eating Jell-O. The taste is light but creamy, with a whiff of the telltale sour, tangy flavor of goat’s milk. It can be served plain, with flavors mixed in, or with some simple toppings, most commonly raisins.

Wandering through Beijing, you’re also likely to come across suannai (酸奶). Again, the name here shows traditional China’s ambivalence to milky treats, as it literally translates to “sour milk.” In fact, suannai is yogurt in a liquid, drinkable form, with a milder, sweeter flavor than you’ll find with nailao. The two share a common ancestor, but suannai came to the scene much later, becoming a popular drink among ordinary health-conscious Beijingers in the 1950s.

Where: As the story goes, the founders of Nailaowei (奶酪魏, 202 Guang’anmen Nei Dajie, 广安门内大街 202号, map) learned their trade from imperial chefs back in the 1800s, and started out selling their nailao on the street. They were most successful in the theater district, and quickly became a favorite treat of actors and others in Beijing’s artistic circles. Today, their shop is tucked away in an awkward corner just north of Niu Jie. While the store doesn’t have the Muslim roots of Niu Jie’s other big-name restaurants, the location is certainly convenient for visitors looking to try as many Beijing classics as they can. If you get lost, just look for the yellow sign with black characters, or say the name to a local–they’ll surely know the way.

Order: The most popular thing to get here is the “palace yogurt” (gongting nailao, 宫廷奶酪), said to be made according to a recipe straight from the Forbidden City. You can get a small bowl for 14 RMB, or jazz it up with a variety of modern blended flavors, including blueberry, papaya, or chocolate, for 16 RMB. Looking at the helpfully picture-packed menu, you might be surprised at the sheer variety of yogurt-related dishes available here. We recommend the zha xian nai (炸鲜奶), or deep-fried yogurt fritters (15 RMB), as well as the more complex flavors of the laogan (酪干), with chewy, slightly sour lumps of dried goat’s milk mixed with sweet raisins (38 RMB).

Alternatively: Nailaowei has opened up other branches in the neighborhoods of Xisi (146 Xisi Bei Dajie, 西四北大街146号, map) and Qianmen (18 Dazhanlan Jie Nan, 大栅栏街南18号, map). We’ve also heard good things about Wenyu Nailao Dian (文宇奶酪店, 49 Nanluogu Xiang, 南锣鼓巷49号, map), whose time-tested house nailao recipe dates back three generations, and stands as an oasis of authenticity on one of the touristy streets in Beijing. (Be sure to arrive early to beat the coach buses and get there before the place sells out its daily batch.) You can find other places selling so-called palace yogurt around Beijing (for example, at Lao Beijing Gongting Nailao, 老北京宫廷奶酪, 80 Huguosi Dajie, 护国寺大街80号, map), but you’ll be hard-pressed to find a place with the same history or variety.

Suannai will be a lot easier to find, sold in little convenience stores and mini marts across the city. The most “local” way is to bypass the modern plastic bottles in the fridge and go straight to the suannai sold in traditional clay mugs wrapped in blue and white paper, often laid out on a tray beside the entrance. But don’t try this if you’re in a hurry, as shopkeepers will usually insist you stay within eyesight as you finish your drink, to make sure you return the mug once you’re finished.