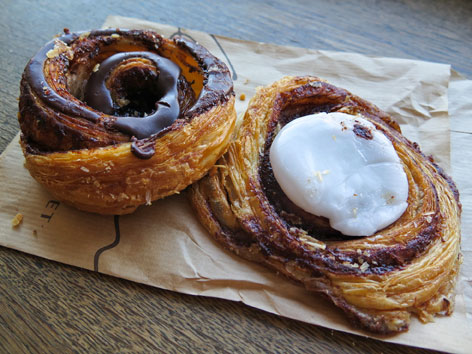 Danish pastries, including the one known simply as a “Danish” overseas, fall under the category of wienerbrød (roughly, “veet-na-bud”), which translates to “Viennese bread.” The Austrians are credited for one of several reasons: One story has the Danish pastry being invented in 1843 by a Copenhagen baker who had been in Vienna and started selling Viennese-style croissants with a remonce (a filling made from creamed butter and sugar) back home, with much success. Another story dates the birth of wienerbrød to a bakery-workers strike in 1850 during which many Austrian workers were hired, bringing along baking traditions and recipes that were later adopted and tweaked by the Danes.

However they came about, they’re a big part of Danish gastronomy nowadays—one site estimates that Danes eat about 10 kilos of pastries and cakes a year—and you’d do well to start your mornings in Copenhagen at a good konditori or bageri (patisserie or bakery; look for the pretzel-shaped sign over the door) to sample the various types of pastry popular here, as there are many, and they are delicious. Hallmarks include the use of laminated dough (yielding that ideal buttery taste and flaky, airy texture) and creamy fillings or sweet icings for added richness.

Among the most important, and recognizable, type of wienerbrød to note are the snegle, or “snail” pastries, spirals of cinnamon, butter, and iced sugar. These include the kanelsnegl (cinnamon snail, typically topped with white icing), the direktorsnegl (“director’s snail”), iced with chocolate—both are pictured above—and countless others. Then there’s the spandauers, circular pastries with jam or cream in their flattened center, and thebirkes, folded pastry with a marzipan filling, topped with poppy seeds; the narrow, seed-speckled frøsnapper; the almond-topped, apple-filled æblesnitter; and the coffee-cake-like brunsviger, topped with butter and brown sugar.

And that’s just the tip of the iceberg. Consider this an invitation to the world of real Danish pastry—get thee to a bakery and get acquainted.

Good to know: The beloved kanelsnegle recently escaped a huge blow—the EU wanted to ban them after a 2013 finding that they typically exceed the EU limit on coumarin, a compound in cinnamon that’s toxic in high doses—by being reclassified as a “traditional food” that’s consumed only occasionally.

Where: The modern chain called Lagkagehuset (multiple locations including the original at Torvegade 45, across from the Metro station in Christianshavn, map) is a fabulous place to sample pastries (and breads) to your heart’s content. Here we found a friendly staff (willing to accommodate our questions despite being quite busy!) and a glassed-in kitchen that lets you watch the women at work, making flødeboller (“cream balls”; a tall, rounded chocolate-covered sweet with fluffy marshmallow-like innards and a crisp wafer base) and the like. Take a number when you walk in, and wait for your turn to order.

Order: This is a personal choice, of course, but we suggest you start with a few snegle (18 kr each; pictured), perhaps a spandauer med crème (with cream), and take it from there. The snegle are large and buttery, built of delicious flaky rings you can pull away from their extra-sweet centers. (Also try a flodebolle here; it’s not technically wienerbrød but it is delicious.) This bakery has a nice, narrow counter lining the windows, perfect for lingering over your pastry and some coffee.

Alternatively: We enjoyed the extra-cinnamon-rich kanelsnegle at Laura’s Bakery (multiple locations including inside Torvehallerne market, Frederiksborggade 21, map), and loved the brunsviger at Meyers Bageri (multiple locations including Amagerbrogade 48, map), a square of fluffy cake evenly coated in buttery brown sugar. In the center of town Sankt Peders Bageri (45-3311-1129; Skt Peders Stræde 29, map) is a quality bakery, especially known for its onsdagsnegl, or “Wednesday snail,” a type of coiled cinnamon roll sold, of course, on Wednesdays (when no less than 4,000 are sold each week).

Nearby is the famous La Glace (Skoubogade 3, map), the oldest confectionary in Denmark (1870), especially celebrated for its fancy layer cakes but also doing wienerbrød. Another great bakery to consider is historic Reinh. van Hauen (multiple locations including the original at Gammel Kongevej 177, in Frederiksberg, map), a family-owned, fourth-generation small local chain.