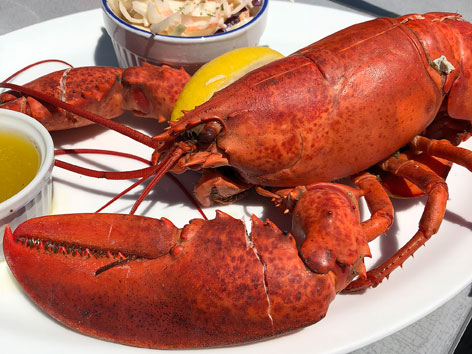 What: Nova Scotia is rich in lobster, with fishing grounds open at various times throughout the year somewhere in its waters. When steamed or boiled right—traditionally in saltwater direct from the sea—the meat is sweet and tender, barely requiring any of the lemon or melted butter accoutrements. It’s a popular order in restaurants during the high tourist season, of course, but it’s also something dear to locals’ hearts—as Lindsay from Eat This Town told us, on Christmas Eve you’ll see people lined up to buy lobsters, or at the beach scooping up saltwater to cook theirs in. Especially on the South Shore, a lobster or two is practically required eating here.

Where: Shaw’s Landing (6958 Peggy’s Cove Rd./Prospect Rd., map) in West Dover, just a few minutes east of iconic Peggy’s Cove (and her lesser-known, possibly more stunning sister, Polly’s Cove), is celebrated for its lobster but has great homemade food across the spectrum, including fish and chips. Essentially, it also has a beautiful outdoor deck overlooking some tranquil water, a good local beer list, and a great slogan: “Beer + Lobster. Enough Said.”

When: Seasonally open, May through Oct.

Order: A steamed lobster at market price. A cold local beer, like one from Halifax-based Garrison’s. Nuff said, right? (The fish and chips are great here too.)

Alternatively: Down the street in Indian Harbour, family-owned Ryer Lobsters (15 Ryers Rd., map) is a longtime favorite for all things lobsters. The wholesale-only market supplies Shaw’s Landing and other area restaurants with lobsters, but is also a fabulous place to pick up your own lobster (and other shellfish like oysters, mussels, and scallops) for at-home cooking. We had a lobster pot at our Airbnb, so this was a no-brainer.

Of course, there are plenty of other ways to enjoy the local lobster without cracking open its shell yourself, such as in lobster rolls (the stand at Peggy’s Cove offers them both hot/buttered and cold with mayo) or lobster club sandwiches (try the Finer Diner). Once the new iteration of Café l’Acadie (8369 Peggy’s Cove Rd., Indian Harbour, map) opens near Peggy’s Cove, you’ll be able to try a traditional Acadian preparation of lobster: the hot lobster sandwich, topped with a creamy lobster-infused sauce.

Good to know: If you are cooking lobster yourself, may we suggest the following method given to us by a local chef: Steam for 20 minutes, then turn the critters over and run cold water on the belly to stop further cooking.