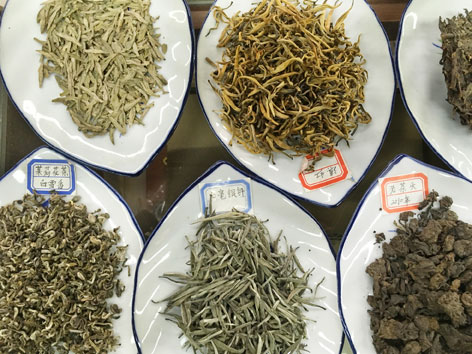 What: Is there anything more quintessentially Chinese than a cup of freshly brewed tea? It’s not surprising that in the nation’s capital, you can find hundreds of varieties from every region and province. But Beijingers’ favorite variety has long been jasmine tea (moli hua cha, 茉莉花茶). With its rich flowery fragrance and slightly bitter flavor, it’s one of the few kinds of tea that’s produced locally. Like many traditional dishes, this choice has its roots in the less pleasant aspects of life in the ancient capital: The strong smell and bitter taste were useful for masking the brackish taste and occasional odor of the water drawn from the city’s wells. While modern plumbing has made plenty of headway since then, local tastes have proven slower to change.

In recent years, however, many older Beijingers have taken up drinking pu’er tea (pu er cha, 普洱茶), grown in southwestern Yunnan province and said to be good for maintaining a strong liver–a vital organ for enjoying a long and healthy life, according to traditional Chinese medicine. Others vary their choice with the seasons, drinking black tea (hong cha, 红茶) in the winter months and green tea (lu cha, 绿茶) in the summer.

Where: One of Beijing’s oldest and most reputable tea shops is Wuyutai (吴裕泰), with several branches across the city (though we usually go to 44 Dongsi Beijie, 东四北街44号, map).

Order: In addition to selling leaves to brew in the comfort of your own home, most locations also have a take-out window selling glasses of freshly made lemon tea (ningmeng hongcha 柠檬红茶) for 10 RMB. In spring and summer, be sure to try a cone of its soft serve tea ice cream, available in green tea and matcha flavors (6 RMB). The staff should be willing to brew a free cup of any other variety for you to try, but it’s expected that you’ll buy some loose-leaf after your tasting.

Alternatively: If you’re willing to go a little out of your way, it’s worth making the trip to Maliandao (马连道, map), just south of the Beijing West Railway Station. This is Beijing’s main tea market, lined with dozens of little shops and three entire shopping malls dedicated to tea and tea accessories (apart from one mall, whose top floor inexplicably features a used camera market). Most shopkeepers will be happy to invite you in for a free tasting, and it’s fascinating to watch them nimbly prepare the cups and wash the leaves to ensure each brewing brings out the best flavor.

Leadership offsites: what they are and how to plan a good one