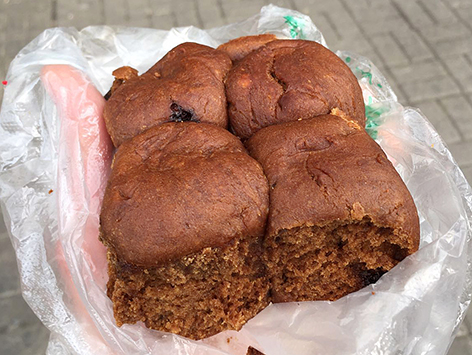 What: Slightly resembling a dark brown dinner roll, freshly made tang huoshao, a sweet baked cake, can be found in bakeries and snack shops throughout Beijing. They make a great quick fix to quiet a rumbling stomach in the middle of an afternoon stroll, or you can make like the locals and buy them in bulk to share with the family as a dessert. The first bite may remind you of a brownie, though in this case the chocolate’s been replaced with a similarly thick and chewy sesame paste, plenty sweet thanks to generous helpings of brown sugar.

While some claim these were brought to Beijing by the Manchu conquerors who swept through the capital in the 17th century, a more credible story attributes their origin to Muslim traders who shipped wheat and foodstuffs up the Grand Canal linking Beijing to commercial cities in the south. This connection to the Muslim community still exists today, and you’re almost guaranteed to find at least one bakery selling tang huoshao just a stone’s throw away from one of Beijing’s several mosques.

Where: It’s a little out of the way, but you can’t go wrong by joining the long lines of jostling customers in front of Hong Ji (12 Niu Jie, 牛街12号, map), in Beijing’s traditional Muslim neighborhood of Niu Jie.

Order: While most places sell tang huoshao by the piece, Hong Ji sells it by weight, with one jin (500 grams) going for 14 RMB. We found that 3 RMB worth is more than enough to satisfy two people. The tang huoshao here are fluffier than most, balancing the flavors of sugar and sesame without either one being too overwhelming.

If you’ve got a sweet tooth, pick up a few ludagun or aiwowo (see Sweet rice cakes entry) to go with your tang huoshao, as they’re usually sold alongside each other. To add some savory contrast, try adding a shaobing (a popular flatbread; see Beijing breads entry) to your bag of goodies as well.

Alternatively: It seems every shop has its own preferred recipe for tang huoshao; they can really vary! Huguosi Xiaochi, a popular chain with outlets across the city (including the one we frequent at 214 Dongsi Bei Dajie 东四北大街214号, map), bakes theirs with a sweet, crunchy sugar-glazed crust, while the tang huoshao sold in many smaller neighborhood stands are drier and have a slightly bitter aftertaste (for example, at the open-air market on Chaonei Nan Xiaojie, 朝内南小街菜市场, map). Try as many different ones as you can!