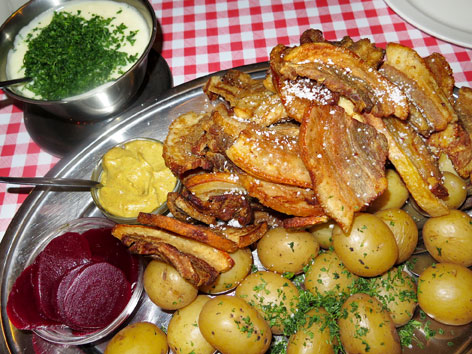 What: Ah, crispy fried pork belly with creamy parsley sauce…now doesn’t that sound tempting? This classic Danish combination, voted the country’s first national dish by the people in 2014, is one for the meat-and-potatoes crowd—in fact, the third component is always whole boiled potatoes—and it is a hearty one, filling and rustic and great for those cold winter months. Stegt flæsk med persillesovs (“stad flisk med per-silay-sauce”) is one of many traditional dishes that reflects the longstanding love affair with pork in this country, where it’s said that pigs outnumber people two to one, and it’s a must-try for any student of Danish cuisine. Just show up hungry.

Where: This dish tends to be the domain of home kitchens and traditional eateries in Copenhagen, and our Danish friends brought us to Restaurant Klubben (Enghavevej 4, map), a Vesterbro restaurant in a century-old space that serves both smørrebrød and an à la carte menu. There’s a nice festive garden open in the summer, and two cozy stories inside, with wood-paneled walls and red-checkered tablecloths—the perfect environment in which to tuck into a big plate of fried meat.

Order: The stegt flæsk med persillesovs (139 kr)—pictured is an order for two; it’s not always so giant, but it will be a generous portion you receive. The thickly sliced pork belly is fried to a crisp—at turns chewy and fatty, much like freshly fried chicharron—and balanced with a pile of small boiled potatoes, sliced beets, and, of course, the parsley sauce, a creamy flour-based gravy (presented on the side for this double serving; it’s typically poured on top of the potatoes). We found it best to do away with the fork and knife and just go at this pork with our hands, tradition or not! It’s a tasty, but very filling, dish, and we were not able to finish it off. You might also try the restaurant’s frikadeller (pork meatballs) and pariserbøf—a traditional type of fried minced-beef burger, served over a slice of bread and topped with pungent stuff like horseradish, capers, red onions, beets, pickled mixed vegetables, and a “sauce” of raw egg yolks—as well as the quintessential dessert rødgrød med fløde (meaning “red porridge with cream”), a sweet red-berry pudding of sorts served with cream.

Alternatively: For a national dish, this isn’t super easy to find, even among traditional eateries. It’s more common to see it offered on Mondays and/or Tuesdays as a special, as it is at the old-school Café Petersborg (Bredgade 76, map) and Københavner Cafeen (Badstuestræde 10, map).

Leadership offsites: what they are and how to plan a good one