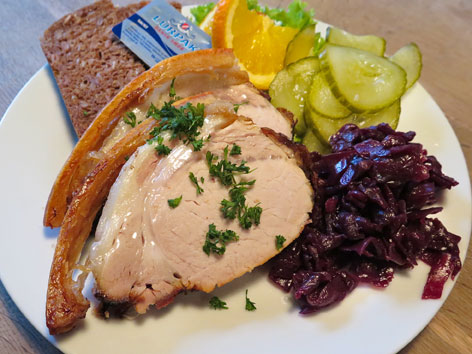 What: A beloved roast pork dish typically served med rødkål (with red cabbage)—as well as, essentially, with some crispy pork rind—flæskesteg (roughly “flis-ke-sty”) is traditionally a Christmas dish, but it’s nonetheless very commonly spotted on the daily menus of Danish eateries in Copenhagen. Like stegt flæsk med persillesovs, it’s an old dish reflective of the Danes’ long love affair with pork, but unlike that surprisingly elusive dish, flæskesteg is so prevalent that you’ll often see it available at both lunch and dinner—with rye bread, red cabbage, and pickles as a type of smørrebrød for the former; as a larger à la carte platter complete with potatoes and gravy for the latter. It’s hard to avoid, but why would you want to? Thinly sliced, tender roasted pork with crunchy crackling and tart cabbage is always welcome in our book.

Where: One of the city’s oldest pubs, first established in 1728, Restaurant Skindbuksen (Lille Kongensgade 4, map) is a wonderfully atmospheric spot for tasty old-timey food, where the dark-wood-paneled walls and ceiling are nearly covered with paintings and photographs.

Order: Pictured is the lunch portion of flæskesteg (79 kr), served with the cabbage, crackling, pickles, rye bread, and butter; after 5pm, you can get the full dinner plate (169 kr), adding potatoes and brown gravy to the mix. The sliced pork was nicely cooked, and we loved the bright flavor contrast provided by the cabbage and pickles, but the crackling was our favorite part of this meal—it’s so addicting, we suspect that’s the case for many! But taken as a whole, this was a great introduction to an important Danish dish, particularly when paired with a big cold Tuborg.

Alternatively: Look for this dish at other traditional-minded restaurants, such as Københavner Cafeen (Badstuestræde 10, map) and Det Lille Apotek (Store Kannikestræde 15, map), both of which serve it at both lunch and dinner, and Restaurant Klubben (Enghavevej 4, map) in Vesterbro, which offers it at lunch. The budget-minded might spring for the 12 kr smørrebrød version from local takeaway Rita’s Smørrebrød (Fælledvej 11, map) in Nørrebro. For a delicious modern update, keep an eye out for chef Claus Meyer’s flæskestegssandwich at his various Meyers Deli locations (multiple locations including inside Magasin department store, Kongens Nytorv 13, map): Roasted pork pairs with crackling, red cabbage, pickles, sliced raw apple, and a mustard dressing on an organic wheat bun. It’s like the Danish version of an (American) Thanksgiving leftovers sandwich.