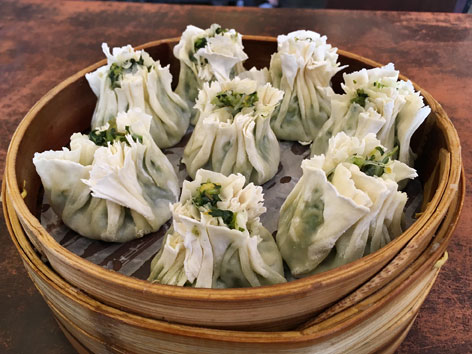 What: Go anywhere in China and you’re likely to find shaomai on the menu. It’s not hard to see why. Small dumplings bundled up like a drawstring sack and steamed in tall stacks of wooden baskets, shaomai are both tasty and easy to make. They’re perfect for any occasion, popular both as a breakfast for busy commuters on the go and as an accompaniment to a lazy afternoon tea.

Countless places across China proudly bill themselves as the real home of authentic shaomai, but Beijing’s claim is a tad stronger than most. Historians trace the dumplings’ origin back to the Mongols, who first made Beijing the capital of China when they conquered the country in the 13th century. Locals came to add their own adaptations, swapping the original mutton and beef fillings for pork, chicken, and seafood, as well as countless vegetarian varieties.

Where: The place that truly put Beijing’s shaomai on the map is Du Yi Chu (都一处, 38 Qianmen Dajie, 前门大街38号, map), located a few blocks down the Qianmen pedestrian street. The restaurant was a favorite of the 18th–century emperor Qianlong, who once stopped by after an incognito trip to the provinces and later presented it with a new shop sign written in his own handwriting. Centuries later, the place still serves shaomai with the same delicate attention befitting an imperial palate, with the plump, stuffing-filled bottoms of the dumplings contrasting nicely with the crisp, paper-thin ruffles of dough adorning the top.

Order: Shaomai are served by the basket here, with eight dumplings per serving. Prices typically range from 46 RMB to 56 RMB for popular stuffings such as pork (zhurou, 猪肉), mixed vegetables (su, 素), and shrimp-and-eggs (sanxian, 三鲜), while gourmet varieties based around seasonal vegetables (say, lotus root in the summer, bamboo shoots in the fall) can be at least twice as expensive. While they taste great plain, most locals will add a dash of vinegar; we usually add some chili sauce and soy sauce as well.

Alternatively: You can find shaomai in most neighborhood dumpling shops, though unfortunately many have a habit of skimping on the stuffing, plumping them up with rice instead. But one place you can usually count on is Qingfeng Steamed Bun Shop (庆丰包子铺, 25 Dahong Luochang Hutong 大红罗场胡同25号, map). Like Du Yi Chu, this longtime local favorite has seen an uptick in customers after getting the seal of approval from a big man upstairs–in this case, current Chinese president Xi Jinping, who stopped by for lunch in 2013.