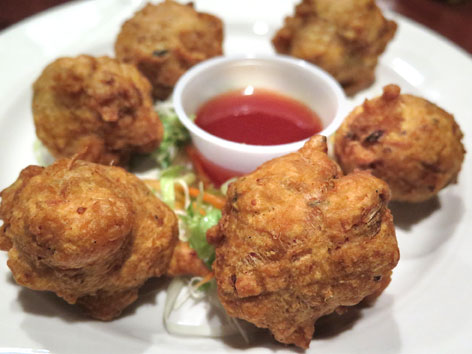 
<< back to foods in Jamaica

What: These fritters are so easy to love—crunchy-fried outside, soft and warm inside, with the taste of cod and the addition, usually, of a spicy or sweet dipping sauce. They’re equally at home at breakfast alongside ackee and callaloo as they are perfect as appetizers at restaurants or cocktail parties. Though many Jamaicans know them as just “saltfish fritters,” the slang name is more fun, and there are several theories as to why it’s called so. In the order of likelihood: It’s an allusion to the order “Stamp and go!” given by 18th-century British navy officers who wanted something done fast; people would stamp their feet impatiently while waiting (or to alert a vendor?) and take it to go; it’s a reference to the dish’s quick-fry nature—just stamp ’em out and go. Trust us when we say McDonald’s has nothing on this Jamaican fast food.

Where: One of the few sit-down restaurants doing all the Jamaican classics (amid some international ones too) right on MoBay’s “Hip Strip,” The Pelican Grill (876-952-3171; Gloucester Ave., Montego Bay, map) is nothing fancy to look at, but it gets the job done—and it’s been around since 1964, so it’s doing something right! Some of the entrees we tried were hit or miss, but these fritters were perfectly done.

Order: The stamp and go ($4.45) was great here, and clearly made with some Scotch bonnet pepper, as the fritters had a nice little kick. The sticky-sweet dipping sauce made for a perfect foil.  We also had a delicious red pea soup to start. .

Alternatively: These fritters aren’t as easy to find as they should be! Another spot we know offering it, at least sometimes, is the adorable and colorful Miss T’s Kitchen in Ocho Rios (65 Main St., map). Let us know in comments if you spot it elsewhere!