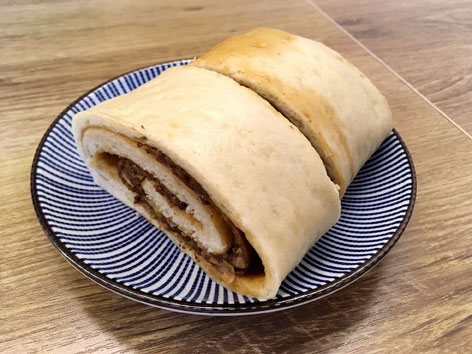 What: This one’s worth ordering almost just for the name, which means “meat dragon.” Though to be honest, perhaps the only thing dragon-like about it (to us, at least) is its heft: It’s a big loaf-like steamed dumpling stuffed with pork, chopped onions, and chives. While stuffed steamed dumplings are a common sight on dinner tables across northern China, the roulong is unique to Beijing. And we think the dumpling fans out there will agree with the locals that bigger is definitely better.

Good to know: Roulong is also called lanlong (懒龙) or “lazy dragon,” with the curlicue shape of the meat wrapped inside the dumpling said to resemble the beast coiled up asleep. The simpler name roulong supposedly gained popularity when menu writers decided the character “lan” was simply too complicated to spell out.

Where: Hidden away in a quiet, narrow alleyway just a block away from the banks of the Houhai lakes, Bei Zheng Roulong (北蒸肉龙, 51 Houhai Beiyan, 后海北沿51号, map) is a no-frills kind of place, but its freshly made roulong still draw a steady stream of foodies, locals, and nostalgic twentysomethings–the blackboard menu and narrow metal tables are a throwback to a time when roulong were a staple of school cafeteria lunches.

Order: The roulong here comes in slices about as big as your hand, for 6 RMB each. Feel free to pick it up with your fingers, and pour out some vinegar, soy sauce, and hot sauce for dipping. While a roulong can be a meal in itself, plenty of simple stalwart cold dishes are available as sides, from boiled peanuts (laocu huasheng, 老醋花生) to chopped cucumbers (pai huanggua, 拍黄瓜).

Alternatively: Arguably the most well-known place for roulong is Da Lan Long (大懒龙), whose logo bears the head-scratching English translation “Big Sarcosaurus.” A chain with more than a dozen locations all around the city, it lacks the homemade touch of Bei Zheng, but offers more variety, with a choice of pork or beef stuffing, plus a few good noodle dishes. If you want to give it a try, we recommend the Dongzhimen (东直门) branch at 12 Bei Xincang Hutong, 北新仓胡同12号 (map).