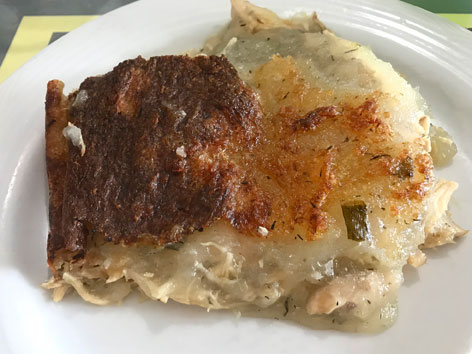 What: The most Acadian dish of them all, rappie pie is a 250-year-old special-occasion potato and meat dish in its most basic sense, but it’s so much more than that. Sometimes called “rapure pie” or “râpure” (after the French patates râpées, or grated potatoes), it tells a story of an oppressed people: The Acadians, descendants of the French colonists who settled in Acadia (nowadays parts of Canada’s Maritime provinces), were deported en masse by the British in 1755, and when they were finally able to return years later, they found their fertile lands had been given to New Englanders. The rocky terrain that was left proved great for growing potatoes, leading to the development of this dish. Today rappie pie is about as nostalgic a dish as you can get when in the presence of Acadians, and it’s sure to let loose a torrent of family stories.

The great news, though, is that far from just a historic relic, rappie pie is actually delicious when prepared in the right hands. In a time-consuming process, the potatoes are grated and strained through cheesecloth; the liquid is then replaced with meat and meat stock (chicken or beef usually, but sometimes lobster or clams). The whole thing is baked in a tray for hours till it’s crispy on top and viscous inside. Some people eat it with molasses on top, or maple syrup or chowchow (a tart green-tomato chutney); others eat it plain. It’s such an unusual dish, and worth seeking out in the few places it can still be found

Where: We love Café l’Acadie (8369 Peggy’s Cove Rd., Indian Harbour, map), newly relocated from Bedford, Halifax to the South Shore, for more reasons that we can count, but rappie pie is one of them. For a long time, it was the only Acadian restaurant in the Halifax area; during our visit we found it well worth a detour to taste these traditional foods and shoot the breeze with chef-owner Gary Le Blanc, a wealth of information on the Acadian plight (and full of his own family stories). Rappie pie is served only on Sundays after 12 noon here, so plan accordingly.

Order: The rappie pie ($10.95; $11.95 with a side salad) comes unadorned here, despite the chef noting that his family was in the molasses-as-topping camp. It doesn’t need a thing. It’s not the prettiest dish, but a hot delicious mess of gooey—and completely unrecognizable—potatoes and perfectly tender shredded chicken, well salted but not overly so. A tasty dish with a unique texture we haven’t encountered before.

Alternatively: There aren’t many other rappie pie gigs in this area. About a half-hour east of Halifax, it is often available at La Cuisine de Brigitte, aka the Acadian Tea Room (79 Hill Rd., Head of Chezzetcook, map), which is open 9am-4pm on the grounds of the Acadian House Museum/L’Acadie de Chezzetcook, a historic site (call ahead if you want to be sure). Other than that, as far as we know (and heard here), you’d have to travel to a French-Acadian town like Pubnico, in southwest Nova Scotia, to find more of this—or befriend an Acadian home cook.