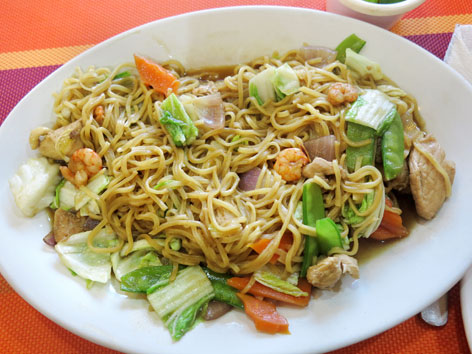 In the Filipino language, pancit or pansit (“pan-sit”) is the word for noodles, and pancit canton look very similar to Cebu’s bam-i, with a different type of noodles. Its medley of medium-thickness wheat noodles, vegetables, and bits of meat can include carrots, beans, cabbage, snow peas, mushrooms, chicken, shrimp, pork, fish balls, and Chinese sausage. Sautéed onions and garlic and soy sauce make up the base flavors of pancit canton, which is said to be pretty similar to yakisoba or even Western-style lo mein. Despite its definite Chinese origins, however, you won’t find “pancit canton” in China, even in Guangdong (modern-day Canton). The misnomer likely stems from Filipinos using the word “canton” to describe Cantonese-style food and/or flavors, as are found in this dish.

The explosion of colors, flavors, and textures from the added vegetables and meat make pancit canton a festive dish, explaining why it’s a mainstay of birthday parties and other special occasions in Manila. Since it’s also offered consistently at a range of restaurants here, we deemed it suitable to include in this guide.

Good to know: Wikipedia lists at least 32 variants of pancit in the Philippines, with the second word in the name indicating the type of noodle used, its town of origin, cooking style, or key ingredient; for example, common varieties include pancit bihon (“bee-hon,” translucent rice noodles) and pancit Malabon (“mah-lah-bon,” from a city north of Metro Manila that uses fat rice noodles and a shrimp-based sauce). Sometimes pancit is dropped altogether in a dish’s name and you’re left with the second word as the name of the dish, as in lomi (“loh-mee,” thick egg noodles in a slurry soup), miki (“mee-kee,” yellow wheat noodles), and sotanghon (“so-tang-hon,” glass noodles or vermicelli). The word pancit is derived from the Hokkien Chinese “pian sit,” meaning “finished” or “cooked food,” not exclusively noodles—but that’s how the word’s evolved here in the Philippines, and indeed, noodles are widely offered ready-to-eat in karinderias (“kah-rin-der-yas,” Filipino cantina-style eateries) and as a “short order” item on many restaurant menus. They tend to be eaten alone as a snack or as one of several main courses.

Where: We found our pancit canton during a long wait for a domestic flight at Carmelino’s Grill (632-736-1680; Old Domestic Rd., Pasay City, map), a few doors down from Terminal 4 of the NAIA (Ninoy Aquino International Airport). The restaurant feels like a hole-in-the-wall local eatery—albeit a large one that has all the regional favorites pretty much covered, from pika-pika (i.e., finger food) to crispy pata, beef tapa, and, of course, pancit canton.

Order: Our pancit canton (Php 145) consisted of a platter of noodles big enough to share, a well-assembled medley of stir-fried julienned carrots, snow peas, pechay (“peh-chai,” Chinese cabbage), purple onions, pork, and chicken with yellow wheat noodles. It had an overall savory flavor, thanks to the soy sauce base, and, true to form, it was mostly dry, cooked noodles (as opposed to crispy noodles, or noodles in broth) with very little sauce. The dish came with a few slices of kalamansi (“kah-lah-man-see,” a local citrus fruit), which we squeezed generously to impart some appetite-whetting tartness. It was the perfect, filling pre-flight snack.