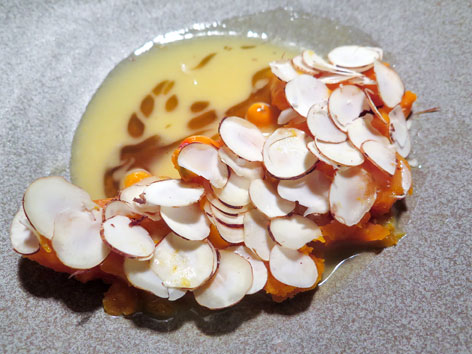 The term “New Nordic” is already falling out of favor in the food world, particularly by those credited with inventing the type of cuisine it refers to, but all it means is this: truly regional Nordic food. The “new” part comes in with the technical precision and creative, modernist leanings of many of the chefs who serve it, including, of course, the man who started it all: Chef René Redzepi of Noma, the restaurant that’s since closed and relaunched (in 2018) and continues to top the list (or place second!) of the S.Pellegrino World’s 50 Best Restaurants.

It’s no exaggeration to say that Copenhagen’s culinary landscape was transformed by the rise of Noma, which opened in 2003: Not only did it introduce this modern interpretation of oft-overlooked Nordic ingredients—such as sea buckthorn, foraged mushrooms and wild plants, rye bread, a host of local fish, game, and produce—but it also created an incredible trickle-down effect of other top chefs, many of whom spent time in Noma’s kitchen at one point or another, who opened their own restaurants inspired by the fact that Danish food can be truly transcendent. This is great news for people who are unable to snag one of Noma’s 45 highly sought-after seats—or shell out the US$500 a head or so for its 20-plus courses with wine.

The restaurants that serve this type of cuisine are the ones you’ll read about on the pages of glossy food magazines, in the food sections of major newspapers, and on most of the websites and blogs that rave about Copenhagen’s “hot food scene.” We think of them as an extraordinary complement to traditional Danish food, without which, of course, this reinvention couldn’t exist. Set aside a bit of cash, make a few advance reservations, and prepare to be wowed.

Where: A restaurant that has frequently joined Noma somewhere on the World’s Best Restaurants list, Relæ (Jægersborggade 41, map) was among the pioneers to move in on once-sketchy Jægersborggade, in the now-hipsterfied Nørrebro neighborhood. Relæ’s chef, the Sicilian-born, Denmark-raised Christian Puglisi, is one of those Noma alumni (Spain’s elBulli, too) you’ve probably heard about. The feel here is welcoming, more Danish bistro than fancy-pants Michelin-starred restaurant: The kitchen is open, the service super friendly, the linen-less two-top wooden tables close enough together to invite conversation among diners. Menus, cutlery, and napkins are kept in a drawer that each diner pulls out from their table. And sparkling wine is offered within 20 seconds of being seated. What’s not to love?

Order: You can choose a four-course herbivore or omnivore menu here (495 kr each), or a seven-course “let’s-try-it-all…ivore” menu (895 kr); wine pairings cost an additional 425-685 kr for four/seven courses. In our opinion, four courses for approximately US$73 at this restaurant is a downright steal; in addition to your four courses, you get a delectable amuse-bouche (ours was so perfect we requested, and received, a second!), plus limitless sourdough bread baked at Relæ’s new sister bakery, Mirabelle, served with Sicilian olive oil—one of the chef’s little Italian shout-outs on the otherwise unmistakably Scandinavian menu. (We personally didn’t feel we were missing out by skipping the wine pairing.)

The menu changes seasonally, if not daily, but to give you an idea of what to expect here: Our four-course omnivore menu  took us from a mind-bogglingly delicious is-this-chicken-or-fish organic trout dish—cooked in chicken fat, sprinkled with bits of fried chicken skin, spread with mustard cream, and piled with local chanterelle mushrooms—to a buttery Hokkaido pumpkin, pictured, with hazelnuts and sea buckthorn (bright and citrusy native orange berries), and ended with thinly sliced lamb from Denmark’s west coast, paired with seaweed and Swiss chard. More local mushrooms featured heavily in the surprisingly pleasing, not-so-sweet dessert: creamy chanterelle mousse, blackcurrant and black trumpet mushroom crumble, and dried chanterelles over a refreshing apple-juice granite.

Alternatively: Bocuse d’Or-winning chef Rasmus Kofoed’s Geranium (Per Henrik Lings Allé 4, 8, map; this is the eighth floor of Denmark’s national soccer stadium) is another highly sought-after New Nordic table, though the tasting menu will jump you up to 2,600 kr for the popular “Universe” option.

As for the myriad of other excellent, if not world-ranked, Nordic kitchens in Copenhagen, we also loved romantic Höst (Nørre Farimagsgade 41, map)—for both its stunning, award-winning interior design and it’s equally beautiful food (three courses plus three snacks, for 355 kr), which likewise emphasizes raw, seasonal Nordic components (to wit: an outstanding North Sea hake with sunflower-seed paste, crunchy raw broccoli, and dill oil)—and clubby, cavernous Geist (Kongens Nytorv 8, map), from Danish star chef Bo Bech, who once operated a Copenhagen bakery that made (very popular) sourdough bread and nothing else. Unlike the others, Geist has an a la carte small-plates menu, reflecting the chef’s ongoing love affair with Nordic ingredients and his flair for wildly delicious creativity (one dish mingled shaved ribbons of raw zucchini with white almonds in nutty cream dusted with curry powder, effectively becoming a spicy curry sauce in your mouth). For more on Höst and Geist, please see Where to Eat Absurdly Delicious Nordic Food in Copenhagen.