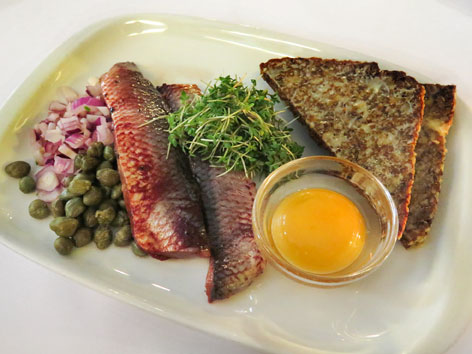 What: More than 1,000 years ago, the Vikings were preserving fish pre-refrigeration with some basic combination of salt and vinegar—and modern-day Danes are still happily doing the same. Herring, or sild, is not particularly regional to Copenhagen, as it is elsewhere in Denmark, like Møn (known for bidesild, a pungent pickled herring that’s been brined for several years) and Bornholm (where smoked herring is famous), but it’s offered every which way at cold buffets and on traditional Danish menus, especially at those restaurants known for smørrebrød and snaps: Herring completes the holy trinity of your iconic Danish lunch. It is, of course, also popularly eaten at home—note the wide variety of pickled herring at any grocery store.

In Copenhagen restaurants, we most often saw herring served cold after being pickled, marinated, or curried, though it can also be found smoked, fried, or breaded. It is typically eaten as a first course at lunch alongside onions and capers and sometimes boiled egg (or raw egg yolk)—and always with buttered rye bread.

Where: Known for its from-scratch smørrebrød and snaps, it’s no surprise that Told Og Snaps (Toldbodgade 2, map) has good herring, too. Established in 2000 right off Nyhavn’s iconic canal-front strip, it’s a friendly, traditional Danish-lunch cafe that seems older than its age—in a good way.

Order: Pictured is the restaurant’s “Ruth’s Christiansø herring, with onion, capers, and egg yolk” (88 kr). (Christiansø is a small Danish island off the northeast coast of Bornholm, adrift in the Baltic Sea and beloved for its marinated herring; Ruth’s is actually the name of a popular herring purveyor there.) It was delicious, meaty and vinegary and sweet in its marinade, which was made rich by the (unpasteurized) raw egg yolk we were instructed to pour over its top. As promised, it was also accompanied by a pile of red onions and capers, as well as the ubiquitous buttered rye and a clump of cress, a peppery green herb.

Other herring dishes offered here include barrel-pickled or -marinated herring from Iceland, homemade curried herring with soft-boiled egg, apple-and-horseradish-marinated herring, and mustard herring, as well as fried and salt-fried herring. Ask for a snaps recommendation with your fish, and we suggest you also try some smørrebrød or else the interesting Danish dish tarteletter, tasty tart shells filled with meat, asparagus, mushrooms, and creamy gravy—it isn’t easily found in restaurants here.

Alternatively: Other good bets for herring, and there are many, include the dark-paneled Restaurant Skindbuksen (Lille Kongensgade 4, map), one of the city’s oldest pubs (first established in 1728)—where the karrysild (curried herring) hit the spot, particularly paired with the boiled egg it came with—and old-school Café Petersborg (Bredgade 76, map), where in addition to Christiansø, pickled, and boiled herring you can find the fish smoked (with poached eggs, no less) and fried. And of course there are the legendary Danish-lunch restaurants like Schønnemann (lunch only; Hauser Plads 16-18, map), where you’ll find some 20 different herring dishes on offer, from pickled spicy (with sour cream) to herring tartare, dill-marinated to gin-marinated. There’s also smoked Bornholm herring served a few ways. (Our money’s on the herring plate, offering three different kinds—chef’s choice.)