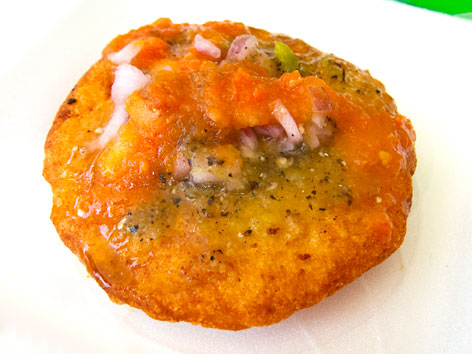 
<< back to foods in Coastal Yucatan

What: These fritters, also spelled pol’kanes—meaning “serpent head,” referring to their traditionally torpedo-like shape—are composed of three essential Mayan staples: corn, beans, and squash, the trio forming the basis of the Mesoamerican milpa crop-growing system. Masa is stuffed with a mix of ground pumpkin seeds (pepitas), ibes—local white beans, similar to lima beans—and spring onion (cebollina); formed into ovals or balls; and deep-fried (as David Sterling points out in Yucatán: Recipes From a Culinary Expedition, this dish very likely dates to before the Spanish conquest, but it would have been grilled on a comal, not fried, before the Spanish introduced domesticated pigs and lard). The golden-brown finished product is spooned with a spicy tomato-based salsa and downed in a few bites.

Good to know: The filling of white bean, (toasted) ground pumpkin seeds, and spring onion is known as toksel; it’s also served alone as a side dish or found within tacos and tamales in the Yucatán.

Where: We tracked this food down at a no-name corner store—actually it did say “Polcanes y empanadas” on it—on Lopez Mateo at Av. Juarez in Isla Mujeres (map). The stand, dispensing these fried foods plus various jugos through a window onto the street, was popular with local school kids.

Order: Several polkanes (10p each), because one won’t be enough! They’re deliciously crispy, with soft and savory insides. The salsa—really a crushed tomato sauce—chopped red onions, and hot sauce offered as accoutrements only enhanced the little fritters. Such a fun street snack, and one with a deep history in the area.

Alternatively: Unlike your panuchos and salbutes, these masa snacks are not popular menu items at Yucatecan restaurants along the coast—we couldn’t find them anywhere else. Keep an eye out on the street, and grab some if you see ’em!