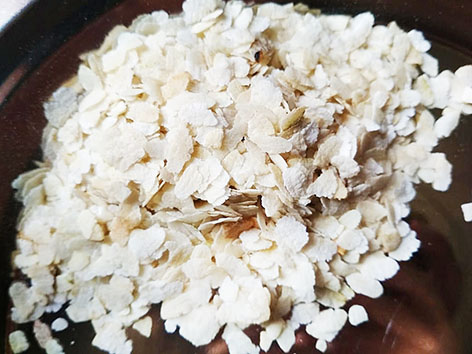 Chiura is rice that has been beaten flat and dried to preserve it. Yep, it’s dried, crunchy, flattened rice, and it’s eaten throughout Nepal, but is especially common in the Newari cuisine of the Kathmandu Valley. You don’t just order chiura alone, however; like plain rice, it goes along with a meal of curries, pickles, and sauces. It is commonly accompanied by aloo bodi tama, a watery but very fiery curry made from potato, bamboo shoots, and black-eyed beans.

Chiura has a very dry texture, so it’s best eaten with wetter curries. Be warned: It swells and expands in the stomach, so it’s easy to end up feeling much fuller than you’d expect after eating some! Bland on its own, chiura is usually eaten with typical Newari accompaniments that are very spicy. Even visitors to Kathmandu who are used to a bit of spice can find fiery Newari food a challenge. It’s a good idea to keep plenty of that simple chiura on hand to soak up the burn.

Order: Plain chiura is pictured, but as mentioned you shouldn’t eat it that way! When you order a plate of chiura, you’ll typically be asked which of a selection of curries and pickles you’d like with it. These are usually pre-prepared and sitting in bowls on the countertop. See also samay baji, a popular use of chiura (and a great way to try it here at Nandini Food Court). A common snack eaten at home in Nepal is chiura with plain dahi (curd) and batmas (roasted soybeans).