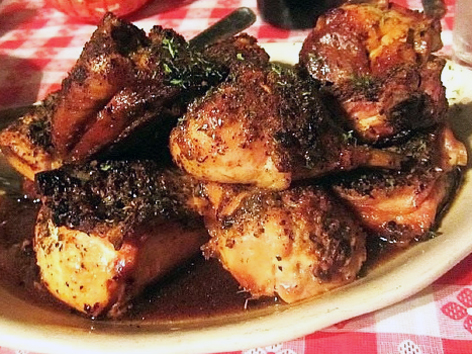 Synonymous with the Belmont Tavern in Belleville, New Jersey, and found exclusively in the region, chicken Savoy is a locally iconic comfort dish of skin-on, bone-in chicken pieces rubbed down with garlic, dusted in cheese and Italian herbs, roasted till crisp, and doused with red wine vinegar. Technically it’s called Stretch’s Chicken Savoy named after Belmont cook Charles “Stretch” Verdicchio, who created this dish in the late 1960s.

Why the hoopla about some roasted chicken? It’s a longtime fan favorite, deceptively simple and yet difficult to re-create (though many try). Some say the magic is in the vinegar splash, which caramelizes the crisped-up skin. Or it’s that the recipe is a closely guarded secret, presumed to have come from Stretch’s family. Whatever the reason, it’s safe to say chicken Savoy has grown larger than the sum of its parts in North Jersey—and with such legend status behind it, this is a dish you don’t want to miss around here.

Where: The Belmont Tavern (12 Bloomfield Ave., map) in Belleville is an old-school neighborhood holdout (est. 1967) in a town that has long since changed. Walking into this restaurant will transport you to another era—one that could very well have appeared in an episode of The Sopranos. The dining room is preserved in time with paneled walls that are plastered with Italian-American crooners, actors, and sports figures. Remember to bring plenty of greenbacks, as the Belmont accepts only cash.

When: Mon, Wed-Sun, 5pm-10pm (closed Tuesdays). Reservations are normally not accepted, but with limited indoor seating in 2020, they are required.

Order: Obviously you are here to try the original chicken Savoy ($14.95), but we also love the chicken Murphy ($17.95), another local favorite consisting of peppers, onions, and potatoes (if you can handle it, ask for it spicy). Seafood lovers should not skip Belmont Tavern’s famous “shrimp Beeps” ($13.95), lightly battered shrimp in a spicy marinara sauce.

Alternatively: In Verona, NJ, Miele’s Restaurant (125 Bloomfield Ave., map) proudly displays “Stretch’s Favorites” on its menu, thanks to Stretch’s son Paul who shared his father’s recipes with this restaurant (which pre-dates the Belmont—it was established in 1954). Miele’s also has Beeps on the menu, adding minced clams to the usual shrimp.

Another spot, Queen Margherita (246 Washington Ave., map), in neighboring Nutley, has its own take on chicken Savoy with its pollo alla Savoia, which swaps out the traditional red wine for a balsamic reduction.

Good to know: Chicken Savoy has been adapted into a tasty vinegary pizza topping in many area pizzerias, such as Giuseppe Ristorante in Cedar Grove and Forte’s Pizzeria in Caldwell.—Contributed by Adam Horvath (Foodigenous)