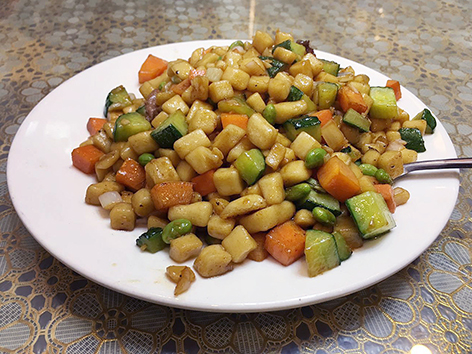 What: Chinese gnocchi, anyone? Geda are simple lumps of dough, stir-fried in a wok with vegetables (popular choices include carrots, cucumbers, and soybeans) and usually meat (typically beef or pork). Chao geda is a relatively modern dish, first being mentioned in the early 20th century, said to have been discovered accidentally by a local cook trying to use up extra dough that would have otherwise gone to waste. It’s very much a local Beijing specialty, but elsewhere in China you’re likely to come across geda in other formats (such as in a soup with tomatoes and eggs, geda tang 疙瘩汤, eaten in several northern Chinese regions).

Where: Located along the banks of Houhai, Beijing’s most picturesque lake and a popular gathering place for locals, Li Ji (李记, 19 Ya’er Hutong, 鸦儿胡同19号, map) is part butcher, part baker, and part restaurant, as well as our favorite place for a plate of chao geda. It may take some hand waving and shouts of “fuwuyuan!” (waiter) to place your order when it’s packed for weekend lunches, but once you’ve flagged them down, they waste no time in slinging plates of delicious golden-brown geda.

Order: Li Ji’s menu offers chao geda with or without meat, both costing 13 RMB. You can also try a range of other classic Beijing dishes here, from ma doufu to baodu. Whatever you do, don’t leave without trying the shaobing!