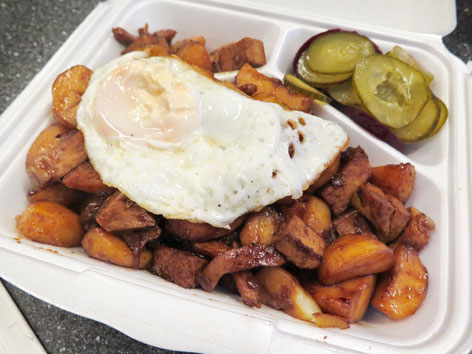 What: A Danish hash that typically combines cubes of meat—cooked pork and/or beef, usually—with diced potatoes, onions, gravy, a fried egg, and sliced beets, biksemad (“bik-sa-mel”) has its roots in that age-old question: What to do with your roast-dinner leftovers? Elsewhere in Scandinavia, there’s a very similar dish called pyttipanna (Swedish), pyttipanne (Norwegian), and pyttipannu (Finnish), but Danish biksemad is traditionally associated with merchant sailors, who are said to have whipped up this quick, satisfying meal post night-watch. It may resemble breakfast, but it’s just as commonly eaten as a hot lunch or dinner, and shows up everywhere from traditional Danish restaurants to “grillbar” takeaways.

Where: We tried biksemad at our own neighborhood takeaway spot, Den Sorte Gryde (multiple locations including Amagerbrogade 14, map), where the portions are generous. It’s not fancy, but if you have an apartment (or park) to eat in, it’s a great spot for a quick and easy Danish lunch or dinner.

Order: This biksemad (90 kr) paired crispy fried potatoes with pieces of meat—hunks of pork and what tasted like slices of hot dog—cooked in a dark brown gravy; a fried egg topped it all off. On the side were sliced beets and pickles. It tasted like the perfect hangover food—meaty, a little greasy, surprisingly satisfying—but it worked pretty well as dinner for a still-jetlagged family. We also liked the homemade frikadeller (meatballs) here.

Alternatively: We weren’t able to try this elsewhere, but we spotted it nearly everywhere, especially on the lunch and/or dinner menus of such old-school Danish eateries as Restaurant Klubben (Enghavevej 4, map), Restaurant Skindbuksen (Lille Kongensgade 4, map), and Café Petersborg (Bredgade 76, map). You can’t miss it!