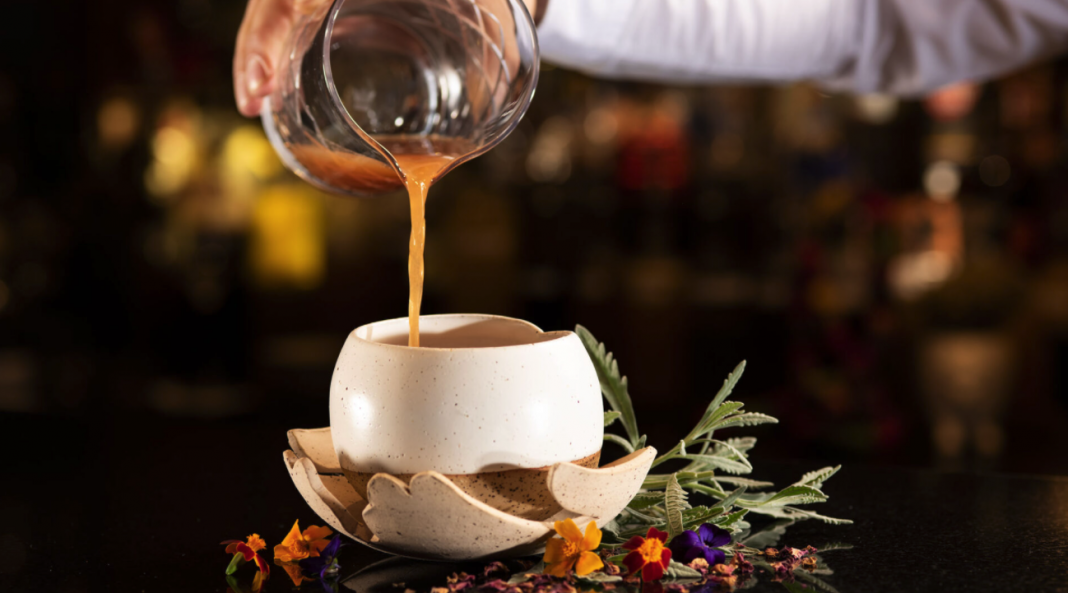 
Art comes in many forms, but I hadn’t considered one of those forms in a cocktail. And I certainly hadn’t expected to find an accomplished mixology artist in Quito Ecuador. But sometimes the best experiences are when you least expect it.

After a long day of touring around Quito, I sat down for a cocktail at Casa Gangotena in the heart of Quito Old Town. While sitting at the open air rooftop terrace, I read the never-ending cocktail menu and was immediately intrigued. It wasn’t just large, but it was unusual…really unusual.

Bourbon, Gin, AND IPA all in the same cocktail…wait…did I read that right?

Telling a Story in a Glass

Casa Gangotena’s FIESTA cocktails were created to take you on a drinking tour through some of Ecuador’s loveliest provinces and towns, celebrating the wealth of unique native ingredients commonly enjoyed in each of these regions during popular festivals. This wasn’t just a cocktail, this was an experience in a glass. From the aromas, to the ingredients, to the tastes, to the glass itself, it told a complete story.

For the Fiesta menu they studied the region where the fiesta was held, determined key ingredients and flavors, and developed a complex drink that would be more than simply thirst quenching…it would be transporting.

I chose to start with the Fiesta del Maiz cocktail. The festival is a harvest celebration held in September in the northern province of Imbabura. The combination of bourbon, gin, and beer intrigued and perplexed me; I had to try it. It came out in a beautiful ceramic glass with a lid on top that held corn nuts and other crunchy goodness. You simply took the lid off and you had a little plate of nibblies to have with the cocktail – it was beautiful and ingenious!

I’m gonna say it…it was probably one of the best cocktails I’ve ever had. The flavors were bright and refreshing (always good in a hot country), and the little bites of corn nuts enhanced the whole experience.

As I watched the other unusual drinks come out for our group, I was equally impressed with the other cocktails and glasses. Other festivals and flavors are represented on the menu like the Diablada de Píllaro; the Devil’s Dance Festival held in the province of Tungurahua south of Quito. The festival celebrates indigenous liberation and rebellion from colonialism. And the cocktail includes rum, apple, ginger, hot pepper, hominy juice and goldenberry – all served up in an inventive container that looks like the devil.

You can see the complete lineup of festival cocktails here.

The Artistry Goes Beyond the Drink to the Glass

I’ve always been intrigued with the vessel in which a cocktail creation is served. I’m partial to the mid-century modern glasses that take you back in time when you see them. I’ve also been curious about the Belgian beer glasses that enhance the famous Belgian beers. But this festival menu took cocktail glasswear to a new level.

When the fiesta menu was created, Director of Mixology Jossimar Lujan partnered with a local pottery artist, Claudia Anhalzer to help create the story of the cocktail. Much like a book cover is important to a book, glassware is what houses this liquid story and also should be a part of the memorable experience.

I had the pleasure of going to visit Claudia at her workshop (arranged by Casa Gangotena) in Quito’s historic center. The petite artist met us at the door and led us up to her rooftop studio.

Claudia showed us the variations of prototypes that got her and Jossimar to the finished product. They worked as a team to come up with the designs and even engaged artisans from the regions of the festivals to collaborate with.

Once they decided on the correct ‘book cover’ for each story, she made 25 of each glass/container for the bar.

Mixology Taken to a New Level

And who is the ‘mad mixologist’ behind these creations? I had the pleasure of meeting Director of Mixology Jossimar Lujan after being wowed by his cocktail creations. And I didn’t just meet him – I had a whole line up of questions for him.

The man was full of surprises starting with, he doesn’t really drink. He said that he occasionally has a beer. I was so stunned by this comment that it left me speechless for a bit. How could someone create the best cocktails in Quito (some of the best I’ve ever had in the world), and not even drink them?!

That’s when I learned it’s all about the flavors, tastes, and science.

He starts normally by breaking down the flavors first. For the Fiesta del Maiz cocktail he explained that he wanted to use grains to honor the festival harvest theme. He chose to work with Bourbon to highlight the grains. He wanted something bitter, so he brought in the hoppiness from the IPA. He wanted tart, and used the goldenberry popular from that area. Then it’s a matter of finding balance in the drink as well as considering the color.

This is where things really got interesting to me.

He talked about how he was distilling ingredients to use in the drink so that they would have intense flavor but no color. I was pretty confused by this concept – when I think of distilling – I think of the process to make liquor. But he was talking about a whole other level of distilling products.

That’s when I learned about the lab…

Field Trip to the Mixology Lab

I followed Jossimar through the back-of-house and into the basement of Casa Gangotena, through the parking garage and into a little brightly lit room. In a weird way – it felt like a fitting place for a mad mixology scientist.

A big machine sat on the table spinning a bottle. There were beakers and bottles on the table that had tape on them with handwritten names. The white board was full of numbers and measurements. And there were industrial refridgerators full of plastic bags and bottles of liquid.

I had really just walked into a mad scientist’s lab.

The machine was a distiller, but instead of distilling things like gin or whiskey – this was a small version that happened to be distilling peach yogurt at the time.

He pointed to the miniature distiller machine where the bottle was spinning and said that they were currently distilling peach yogurt. I was confused at first – I had never ever considered why you would want to distill things like peach yogurt. Jossimar explained that there are times when you don’t want use a bitters, amaro, or oil/essence – you just want the strong flavor in a clear liquid form for the cocktails. This is purely about taste and presentation/color.

He put a drop of the clear distilled peach yogurt on my finger to try. I licked it off my finger. This single little clear drop of liquid packed a powerful punch; it played tricks with your senses. It was a drop of liquid that tasted as if you were eating peach yogurt; a tart and sweet combo in a package you wouldn’t expect.

He explained that by distilling it, you can use small amounts to infuse intense flavor and not add color to the cocktail. I thought about it and understood once I considered what a spoon of peach yogurt added to a drink would look like…not very appetizing right?

He continued to show me around the small lab letting me taste various infusions and syrups that were made in the lab to try out new flavors, textures, and ultimately cocktail stories. All of these things come into play when Jossimar creates a drink. He’s looking for the perfect mix of flavors.
This took mixology to a whole new level that I didn’t even know was possible.

But it does explain why the cocktails at Casa Gangotena are the best in Quito.

Even the Standard Cocktails Have Flare

You might wonder if you can just simply order a typical drink like an old fashioned at Casa Gangotena. Yes – you can…but there seems to be nothing simple in Jossimar’s world.
Even my Old Fashioned came out on a special wooden try created specifically for this drink. There was a whole hands-on process of putting the drink together at the table. The waiter had to walk me through the process!

And finally he’s even trained the bar staff in his creative ways to make a cocktail specifically for YOU. The bar staff will listen to people’s preferences and provide a custom cocktail personalized to your tastes…and mood at the moment.

You like sour?
Smokey?
Sweet?
Bitter?
Or a combination of these?
No problem.

This is how I ended up with a lovely martini with a few twists.

I not only loved the cocktails, but I loved this entire concept of serving up a story that brings you closer to the local culture. You don’t just drink, you learn and drink at the same time! If you are visiting Quito, be sure to stop in and enjoy the stories at Casa Gangotena where you’ll find the best cocktails in Quito.

I was a guest of Metropolitan Touring on this trip.  However, all opinions expressed here are my own.