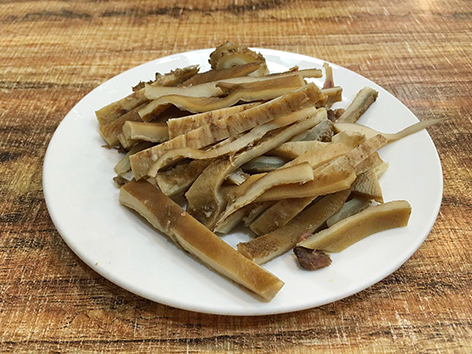 What: Beijingers have a real knack for naming their favorite foods. Baodu means “exploding stomach,” but fear not, this doesn’t describe the result of eating this popular dish; it refers only to the practice of boiling slices of cow or goat stomach in super-heated water for a few seconds, before flavoring them with ginger and garlic and serving them piping-hot. Baodu is very much a winter meal, with restaurants traditionally remaining shuttered until the autumn leaves begin to fall. But nowadays, you should be able to find it any time of year–if unadorned offal is something you’re into, that is. Like hot pot, baodu is served with a bowl of rich, thick sesame sauce for dipping, topped with chives and cilantro.

Baodu is yet another local dish originating from Beijing’s Muslim community, and some of the city’s top spots for baodu are still halal eateries adorned with flourishes of Arabic calligraphy above the doorway.

Where: Our go-to spot for this (and killer beef noodle soup, see below!) is Baodu Man (爆肚满, 2 Shijia Hutong, 史家胡同2号, map). We’ve learned that “Man” here is the owner’s last name, not his superhero moniker, but the great food and can’t-get-more-local atmosphere definitely makes Baodu Man a hero in our eyes. Located a few blocks away from a bustling vegetable market, the walls of this little eatery are lined with framed calligraphy paintings declaiming the deliciousness and storied history of the food served here, along with several blown-up stills from a popular local foodie TV show that once featured this establishment.

Order: Sitting down for baodu is a kind of bovine anatomy lesson, with different dishes made from different parts of the cow’s stomach. The most popular are bai ye (百叶’; 35 RMB) and du ren (肚仁; 40 RMB)–the former is an almost calamari-like tangle of gray tentacles, while the latter looks almost like little meaty flower petals. When given the choice, we usually go with the bai ye, since it’s chewier–and easier to pick up with chopsticks!

But baodu is rarely eaten as a meal by itself, so you’ll want to get a side dish or two (usually vegetable dishes served cold–we like the cucumber salad (pai huang gua 拍黄瓜) for 12 RMB. And don’t pass up the offal-free beef noodle soup, shao niurou mian 烧牛肉面 (18 RMB)! In fact, even if baodu isn’t your thing, the noodles alone are all the reason you need to check out Baodu Man. While you can find beef noodle soup in nearly every Muslim restaurant, it usually comes with a clear broth and a few plain slices of boiled meat. But Baodu Man’s beef is chargrilled, with a crispy, almost-burnt exterior and a melt-in-your-mouth texture, plus a heavier, mushroom-flavored soup. It’s unmissable!

Alternatively: Baodu Feng (爆肚冯, 56 Langfang Ertiao, 廊房二条56号, map) is another spot with a long history of cooking up a good plate of baodu, though its location on the Qianmen shopping street means the clientele is more tourist-heavy.