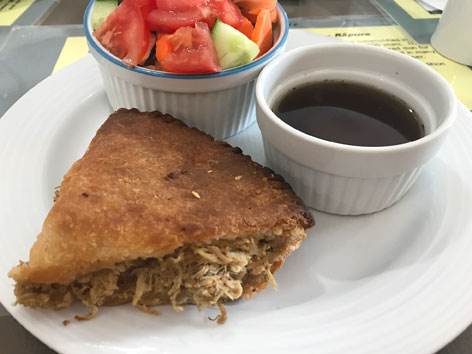 
<< back to foods in Nova Scotia

What: One of several Acadian dishes to try in Nova Scotia, this meat pie is distinguishable from other beefier regional variations (such as Quebec’s spiced tourtière) from its combination of meats: Acadian meat pies are generally a mix of pork, chicken, and beef, giving it a lighter taste. Inside there’s also often potato, onion, and spices like allspice; the crust tends to be a bit breadier than just straight-up pastry. It’s traditional to eat Acadian meat pies around Christmas, but at some restaurants you can find it year-round.

Where: Newly relocated from Bedford, Halifax, to the South Shore, Café l’Acadie (8369 Peggy’s Cove Rd., Indian Harbour, map) serves true Acadian meat pie alongside many other favorite Acadian dishes (see also: rappie pie, fish cakes, potato pancakes). During our time in Nova Scotia, we found it well worth multiple visits to taste the culture’s hard-to-find traditional foods and chat with wealth-of-information chef-owner Gary Le Blanc, who can trace his own Acadian family history back to 1602.

Order: The meat pie ($12.95) is delicious here, made with shredded roast beef, roast chicken, and roast pork. The generous slice is served with a side of beef jus for dipping (as well as a side salad). We loved the soft, bready texture of the biscuit crust, and found the jus was perfect for moistening up each bite.

Alternatively: On the South Shore, en route to Peggy’s Cove, the cute, colorful, and cash-only White Sails Bakery & Deli (12930 Peggys Cove Rd, Tantallon, map) offers to-go 9-inch “tourtières” when it’s seasonally open—and though it makes a lot of Montreal specialties (like smoked meat and real poutine), the staff told me it was an Acadian-style meat pie. You’ll just need your own oven for reheating. (This deli also offers a local Nova Scotia specialty we didn’t get around to trying: the peanut butter burger.)