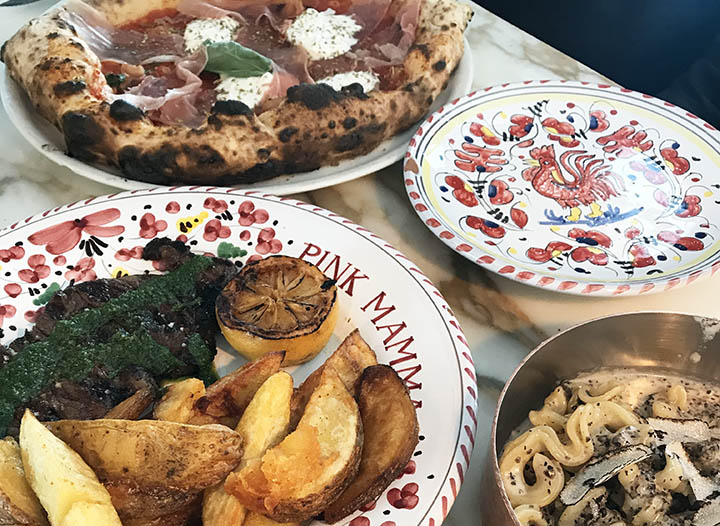 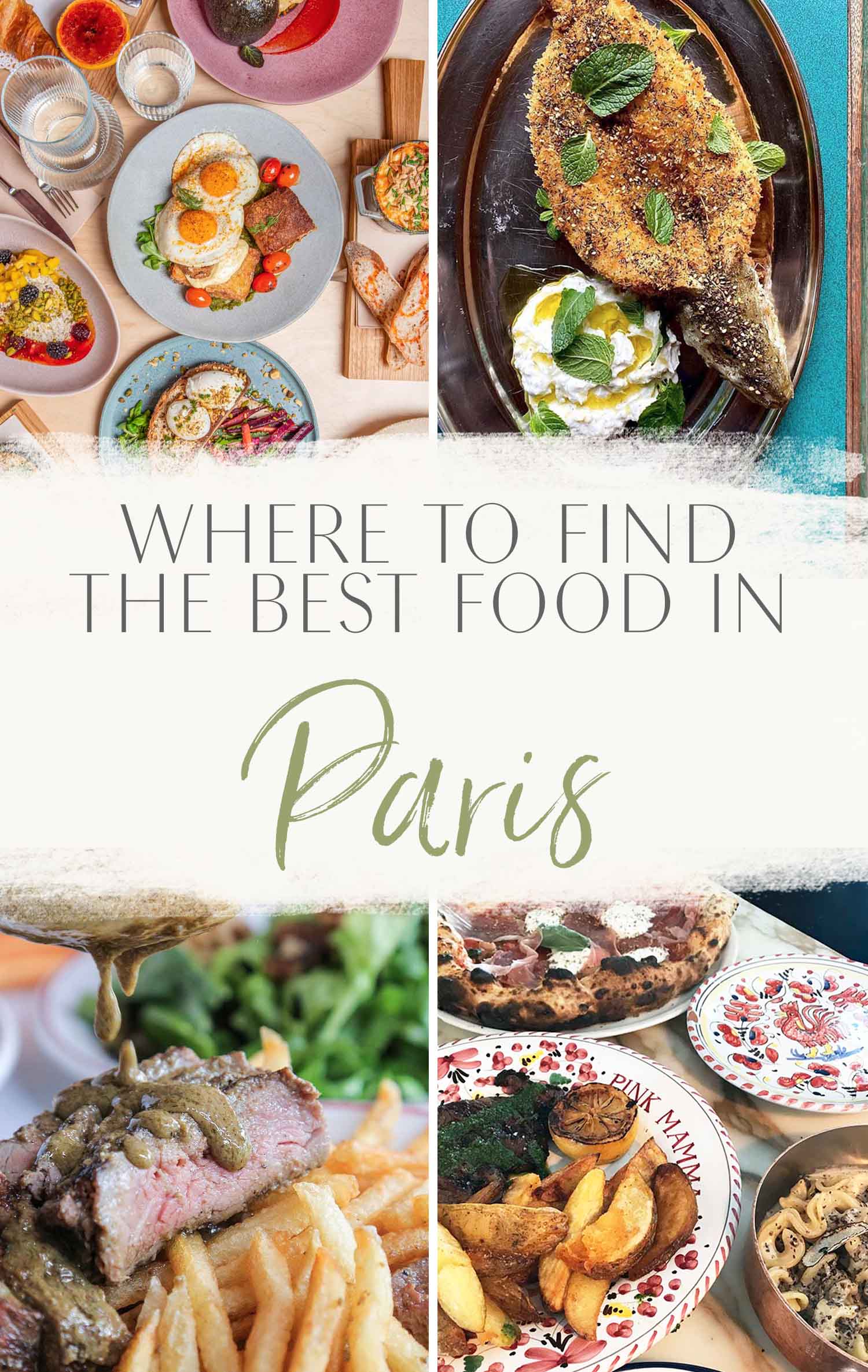 Paris really has it all — history, culture, romance… and incredible food!

If you’re visiting France’s capital city, you’re in for a treat. French cuisine has been globally renowned since the 18th century, not only for its flavors but also for its presentation and the overall dining experience.

You’ll get to indulge in some incredible French meals like steak-frites, croque monsieur sandwiches, and poulet chasseur — and that’s not even including the delectable pastries and desserts that Paris is known for!

In addition to French fare, you can also find several other types of food when you visit Paris because of the diversity of its population.

France borders 11 different countries including Germany, Italy, Spain, and Switzerland, and it’s just a short ferry or plane ride away from North African countries like Morocco.

Because the cuisine (and culture, for that matter), is multifaceted, I’ve compiled need-to-know tips for eating in France!

This list includes some of the best restaurants in Paris, with a sprinkling of cafés, bars, and bakeries that you should visit during your holiday.

Le Relais de Venise doesn’t have a big menu, but the few items that it does offer are exceptional!

Their specialty is the steak-frites, which come with salad and a healthy serving of their secret sauce. Apart from that, they only serve up wine and select dessert items. While you might not be able to get variety here, you’ll be treated to a quality meal.

And the green sauce they top their signature dish with is legendary and top secret!

Tip: The excellent quality of the steak-frites at Le Relais de Venise is no secret to locals and tourists alike — expect long lines unless you arrive early or right when the doors open.

Marchés des Enfants Rouge may be Paris’ best foodie secret! And it happens to be the oldest operating food market in the city.

Although at first glance Chez Alain Miam Miam seems like an unassuming place to grab a casual bite to eat, it’s actually so much more than that.

This place is serving up some of the best sandwiches on the planet.

Not only will you get to order some generously-sized delicious sandwiches of all kinds, but you’ll get to meet the owner and sandwich-maker.

As customers wait in a line that can literally wind down the street for hours, Chez Alain and his crew keep people laughing with their offbeat sense of humor.

Miam miam is the way that the French write yum yum — and the tongue-in-cheek name shows you exactly what to expect of Chez Alain and his lighthearted approach to haute cuisine. His raucous and friendly character truly makes the experience memorable!

Although the meat-based options are fantastic, Chez Alain Miam Miam does order several options that accommodate gluten-free and vegetarian diets. 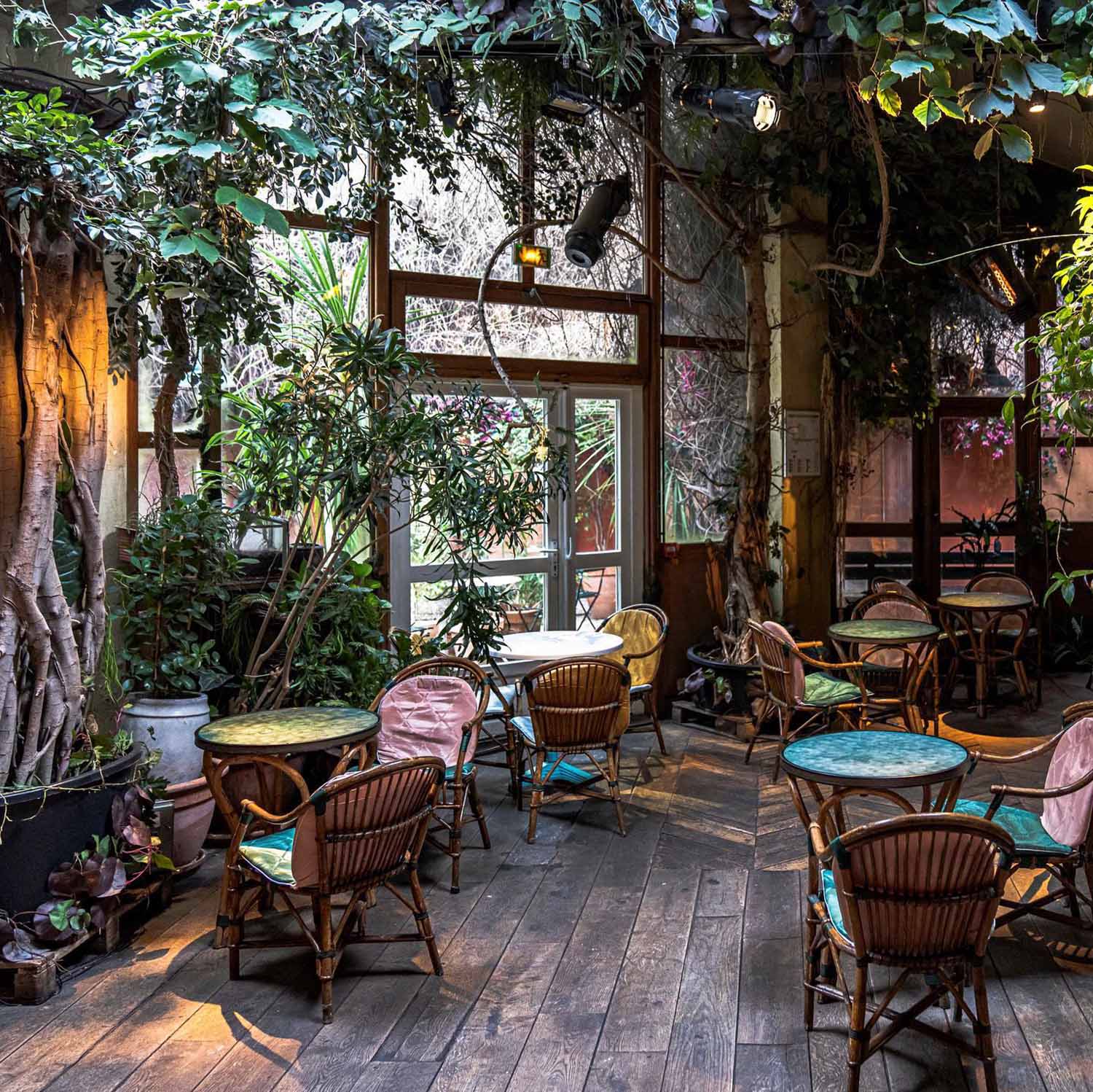 For an eclectic and tropical laid-back vibe, head to Le Comptoir Général. Located on the banks of Canal Saint-Martin, this bar has a cinematic, old Hollywood aesthetic and a fantastic menu of delicious cocktails.

La Secousse is one of the most popular cocktails, and you can pair it with small bites that are inspired by African and Asian cuisine.

The gorgeous airy interior of the very Instagrammable Pink Mamma restaurant is the perfect place to relax and enjoy a meal. The eclectic interiors are decorated with plants and the glass roof will make you feel like you’re in a greenhouse, but one with spectacular views of Paris!

The menu here changes every month because they always want to feature the best seasonal ingredients possible.

You’ll want to make reservations well in advance as Pink Mamma is a popular place with tourists and locals alike. 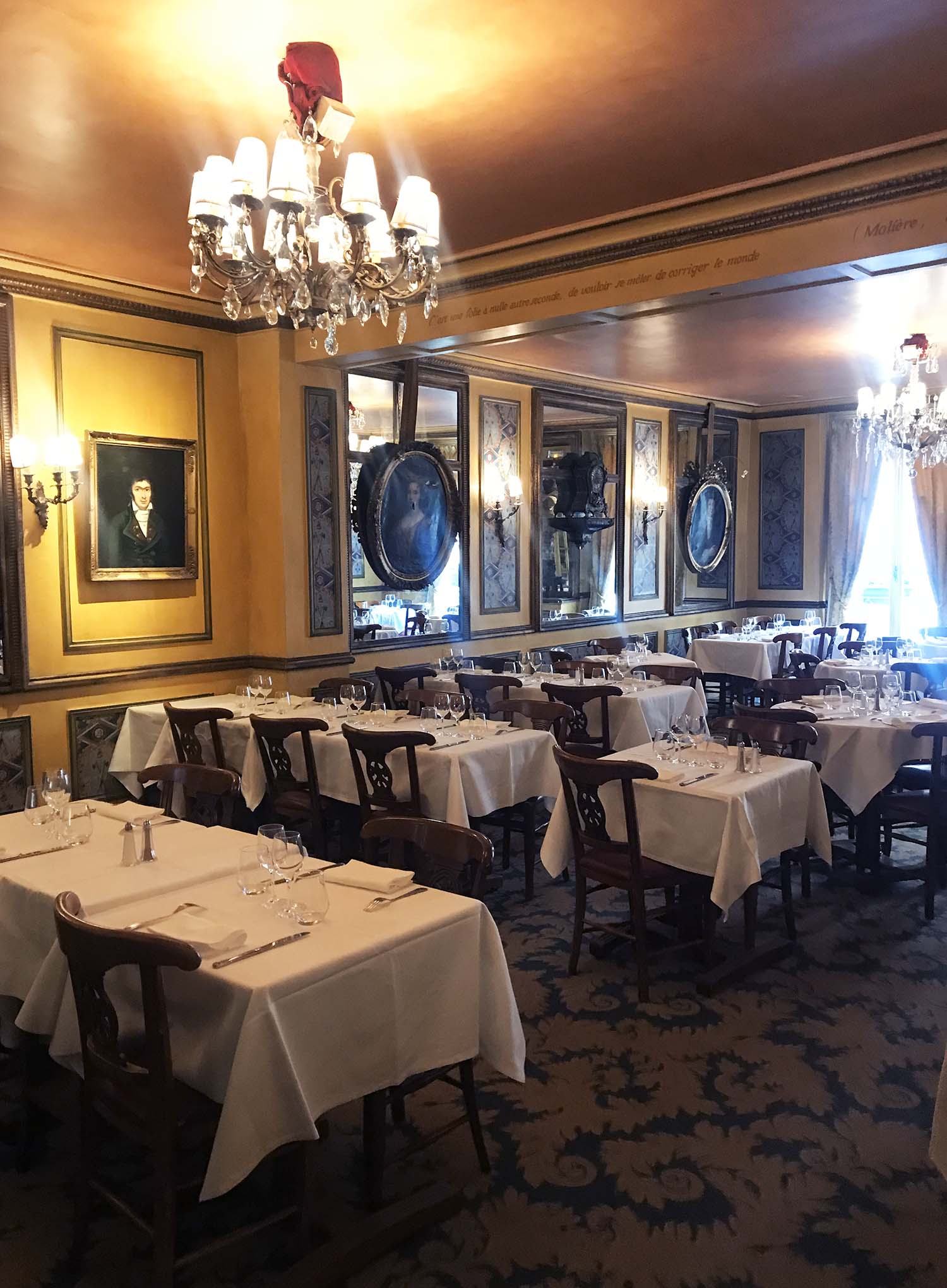 If you’re a history buff, you’ll want to visit Café Procope, the oldest café in the city, and join its long list of patrons which includes figures like Marie Antoinette, Voltaire, Benjamin Franklin, and Napoleon.

The cafe is also partially a museum with an impressive collection of artifacts including the final letters between Marie-Antoinette and Louis XVI.

Although it might not seem too fancy, ordering a coffee at Café Procope is a great idea.

When the restaurant opened in the 1600s, coffee was an exotic drink that wasn’t nearly as commonplace as it is now. It’s said that Voltaire drank forty cups of coffee here in one day — while I definitely don’t recommend you have more than a cup or two, sipping on coffee at Café Procope is part of a long tradition. 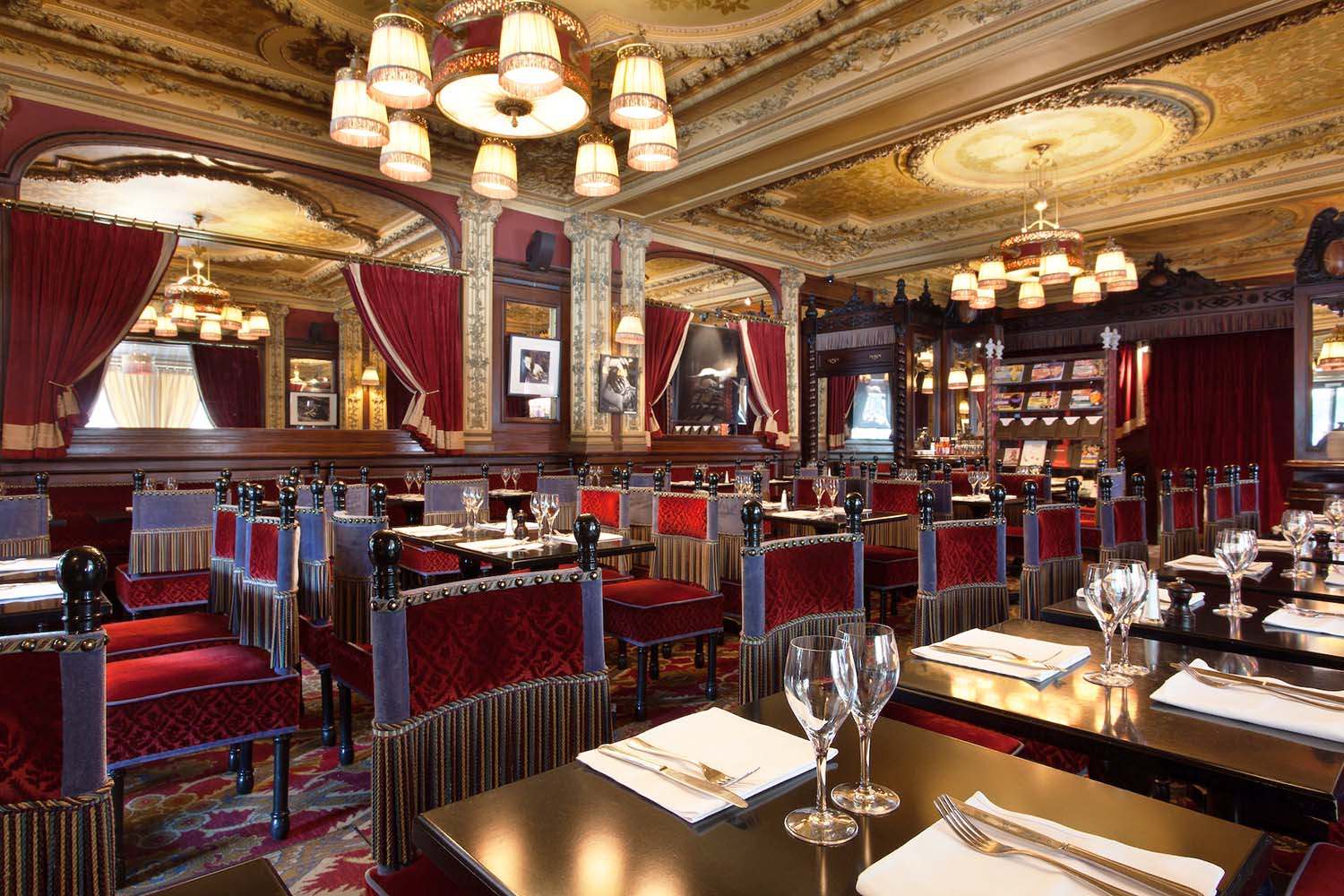 Located in central Paris, Café le Zimmer provides a place to enjoy a meal not only in the early morning hours but late into the night as well! When you step inside, you’ll feel like you’ve stepped back in time thanks to the 19th-century decorative style.

The service and ambiance aren’t the only reasons that Café le Zimmer is one of the best restaurants in Paris.

The menu is excellent as well, and in addition to the wine and cheese you can order, they also serve up a selection of seafood dishes as well as steak and even some vegetarian options. 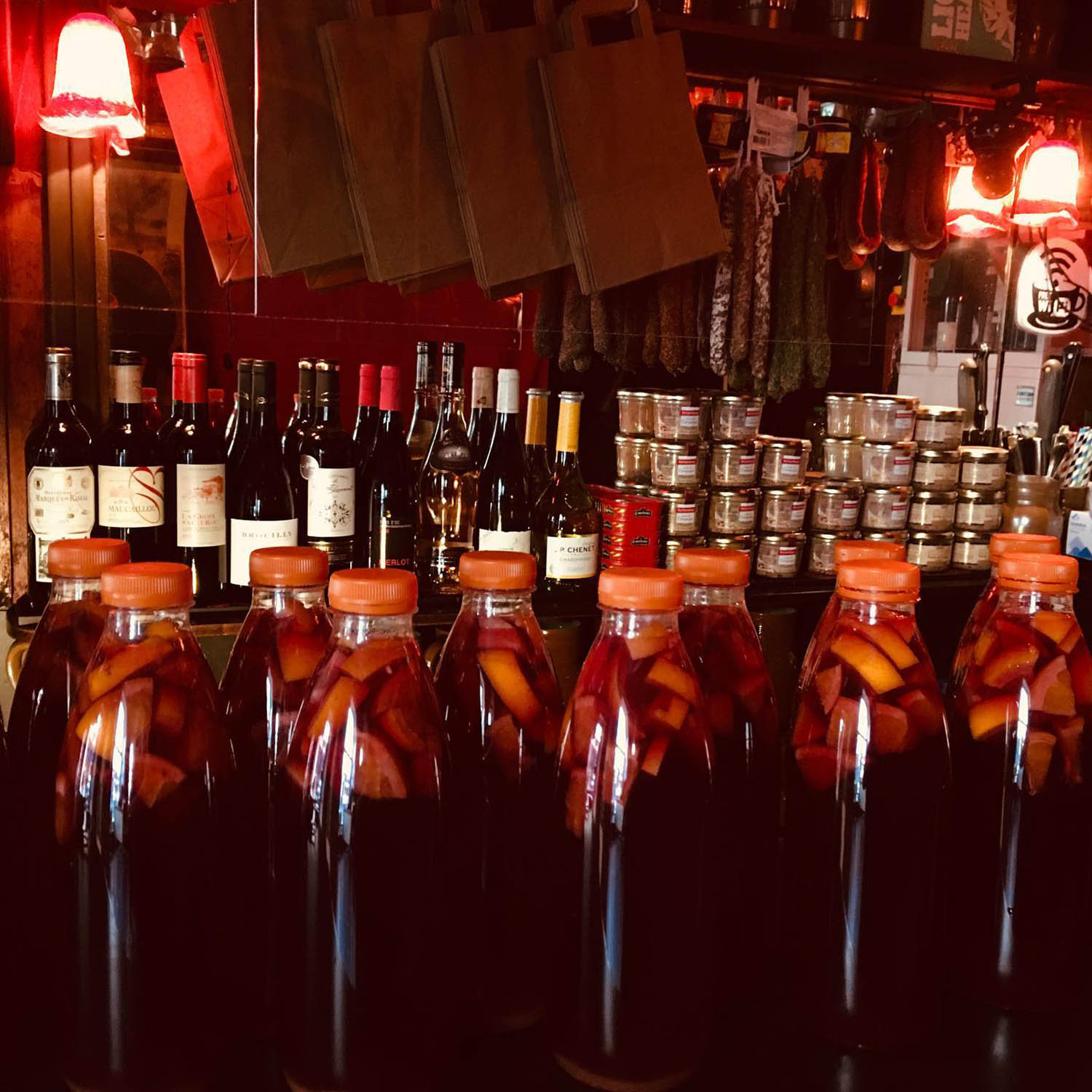 The dark and rustic vibes of Le 10 Bar Odéon make for a cozy place for conversation paired with sangria, either by the glass or by the pitcher!

The prices here are affordable and the quality is high, which makes it popular with local college students so the average age of the people here tends to skew a bit younger. It has a friendly and welcoming atmosphere that is perfect for a lively night out that doesn’t break the bank.

If you’re interested in more tips for visiting Paris on a budget, check out this guide! 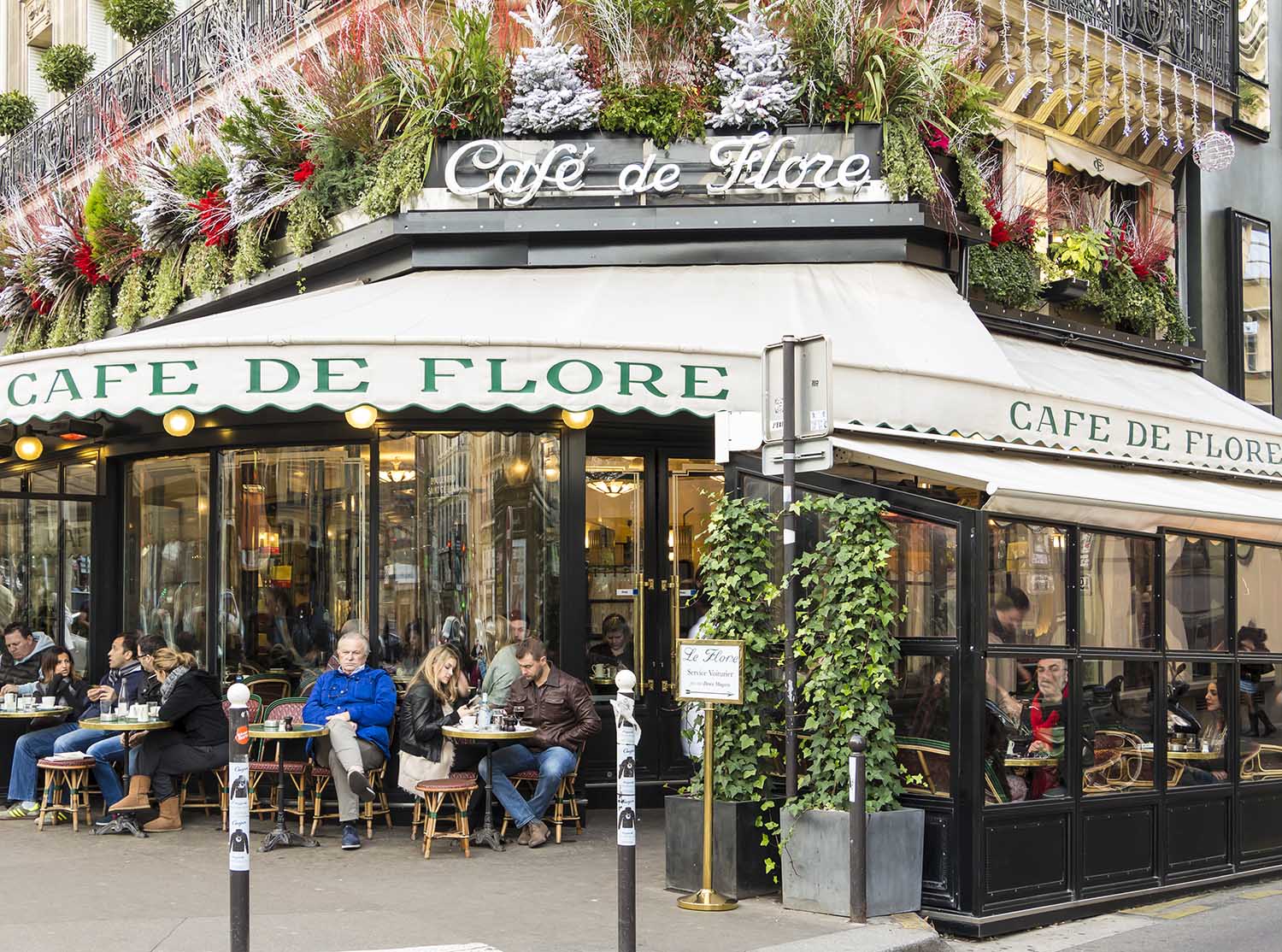 Coffee and one of the freshly baked pastries

While the food here is pretty good, the reason Café de Flore shines is because of the atmosphere.

It has long been a hub for the creatives of Paris and you might even recognize some of the names of the famous guests who spent time here.

Pablo Picasso frequented the cafe throughout his life and there’s even a photograph of a 58-year old Picasso visiting Café de Flore in 1939 to prove it.

Order your coffee and enjoy it while people watching, reading a great book, or working on your own creative projects. 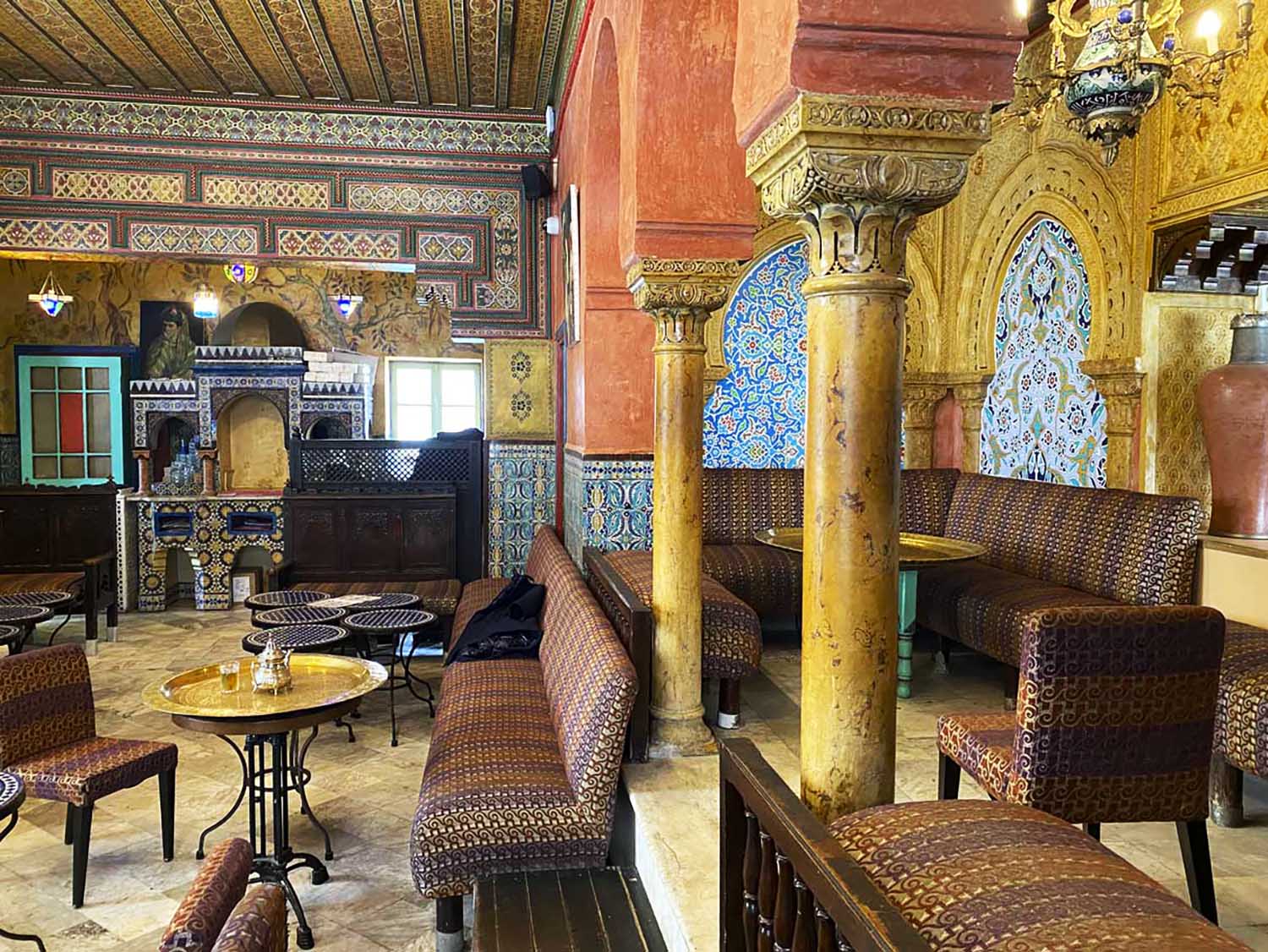 There’s a full restaurant here but where the Salon de Thé de la Grande Mosquée really shines is its tea and pastries.

The tea room is open daily but you can’t make reservations in advance, so be sure to budget some waiting time into your schedule. It opens every day at 9:00 AM so you could also head here first thing in the morning for your breakfast. 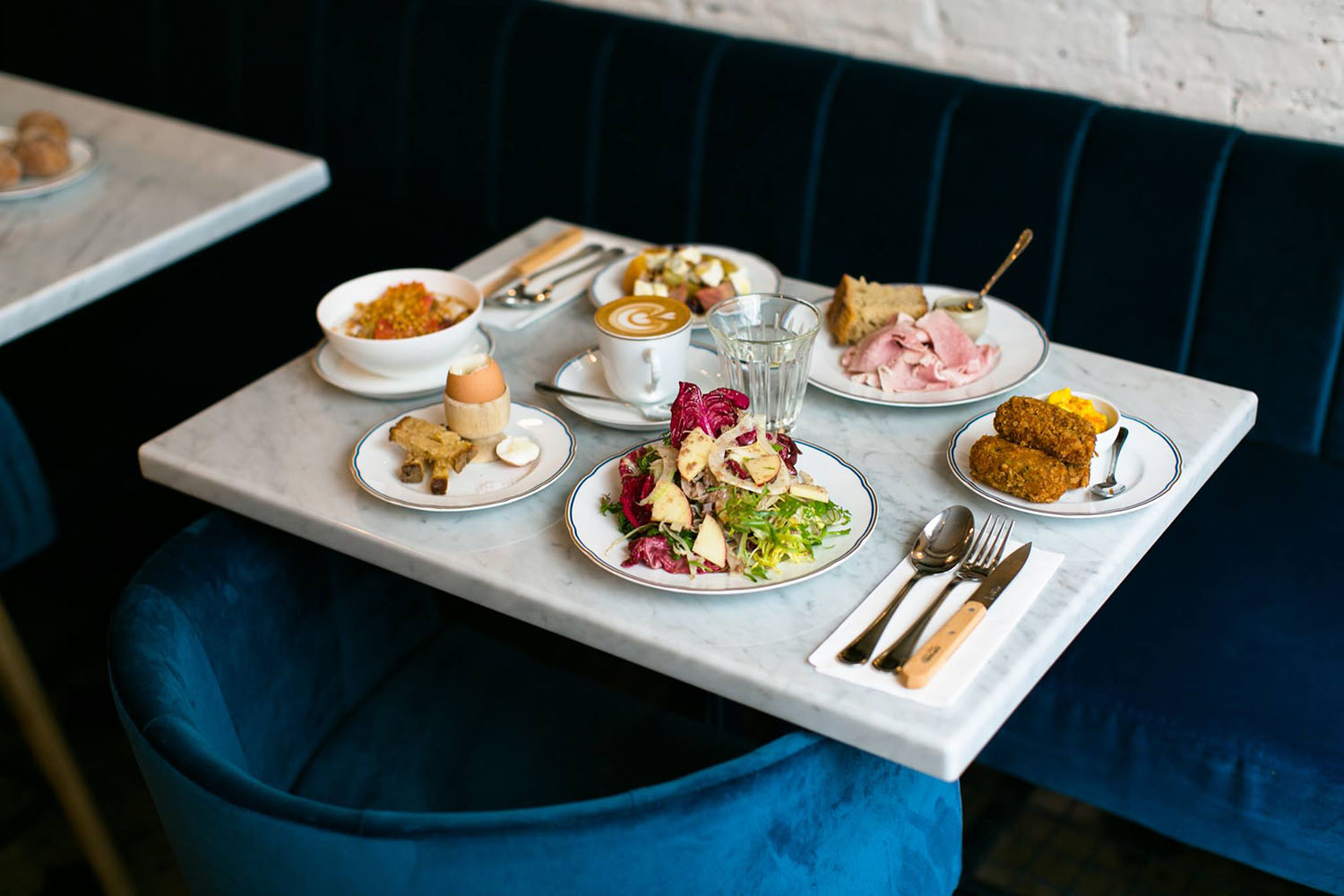 Regardless of which Holybelly location you head to, you’ll be treated to some excellent breakfast food.

You can order pancakes, eggs, bacon, and toast made from artisanal bread at Holybelly5. Hollybelly19 has a smaller menu that consists of small plates like Thai rice congee and soft-boiled eggs with toast soldiers.

They also serve drinks, such as espresso or filtered coffee. In addition to the standard menu, Holybelly curates a selection of daily specials that are often created by the staff.

The restaurant prides itself on being a fun place to work, and they let their employees’ creativity shine through. 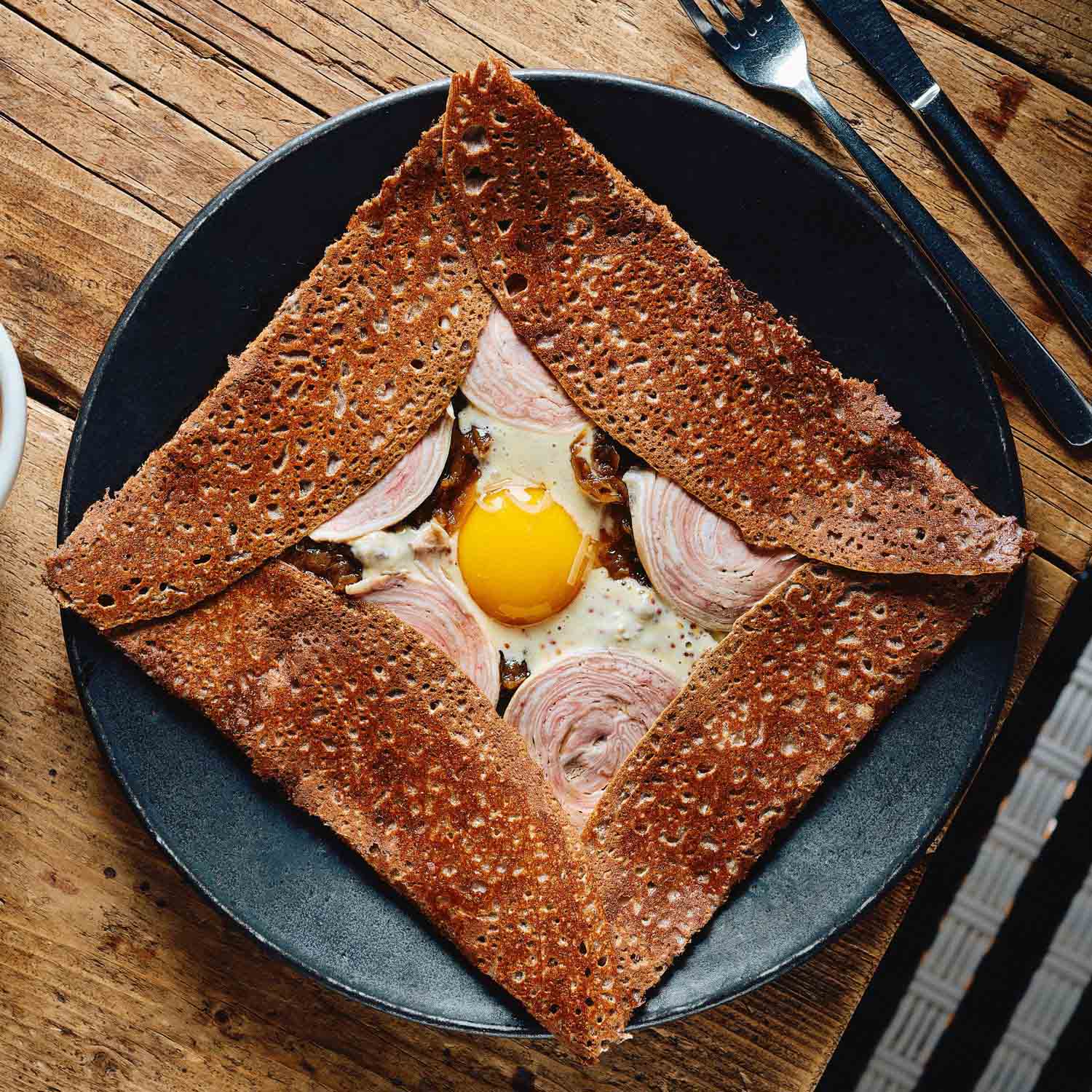 With multiple locations throughout the city, Breizh serves up cuisine inspired by the region of western France it’s named after.

Although each location is as great as the others, you might find it easiest to check out the Canal Saint-Martin location of Breizh as it’s located close to several landmarks — plus if you choose to get your food to go, you’ll be able to find somewhere to enjoy it close by.

One of the most popular dishes on the menu is the wheat flour crepes which are served with a mix of sweet toppings like chocolate, bananas, and strawberries. 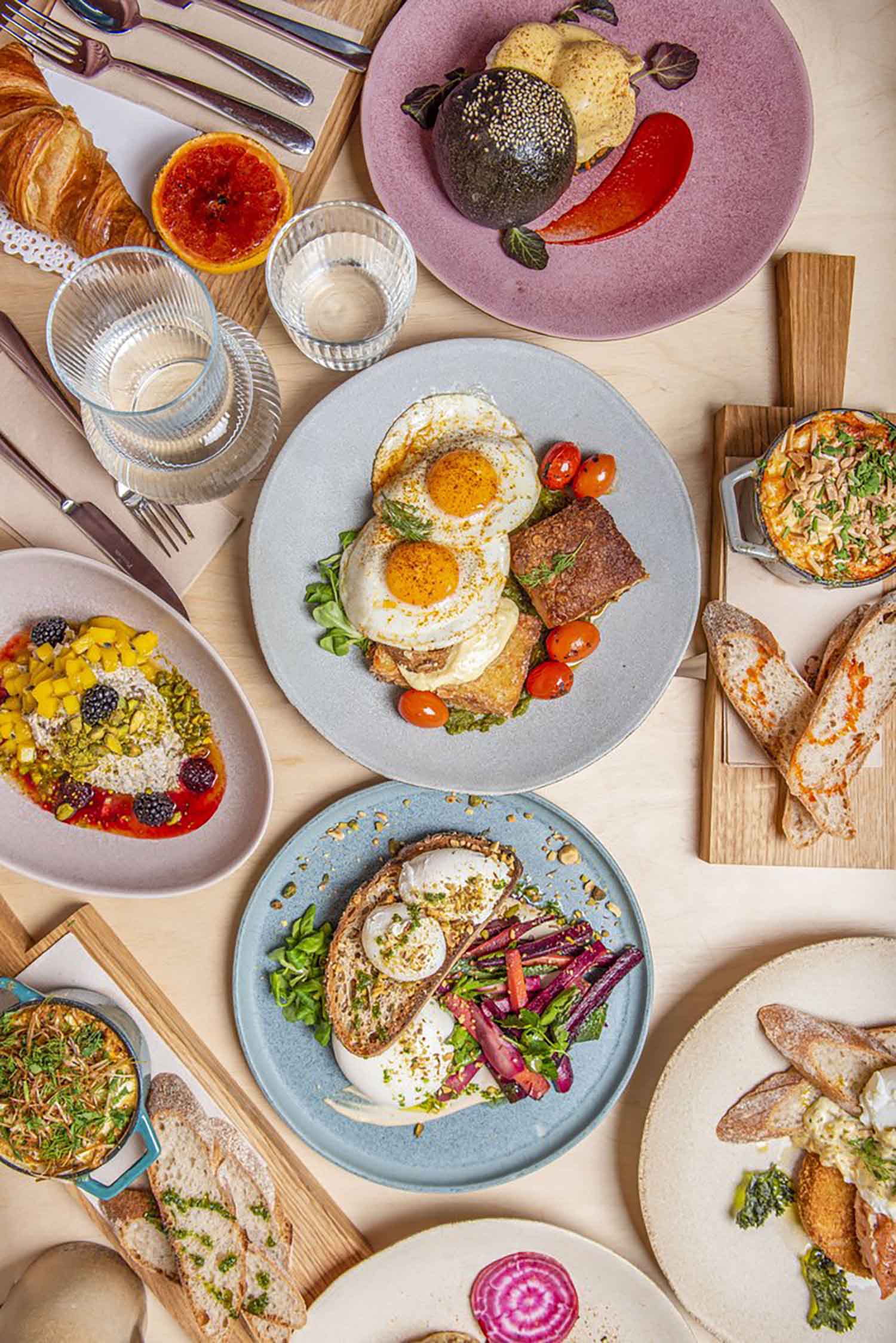 Hardware Société was first opened in 2009 in Melbourne, Australia by Di and Will Keser, who were on a mission to redefine and elevate typical breakfast food.

Since then, they’ve opened multiple locations worldwide including the one in Paris.

The Burrata is served with honey-roasted heirloom carrots as well as pumpkin hummus and hazelnut dukkah. The Pork Belly & Fried Eggs is another great option and pairs well with the spiced tomato jam it’s served with! 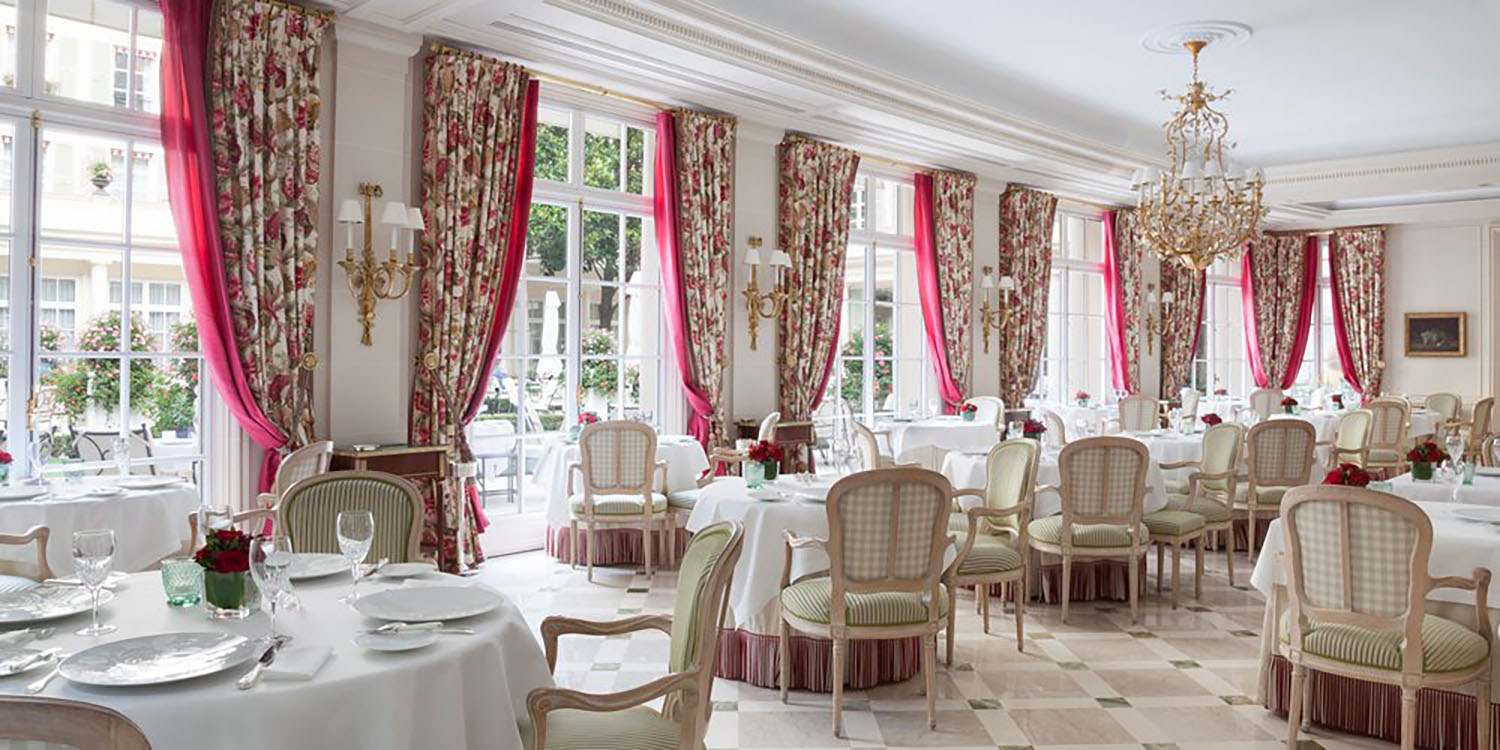 If you’re looking to treat yourself to some exceptionally fine Parisian dining, Epicure at the Hôtel Le Bristol Paris is the place for you. Everything you can order is elevated and exceptional, but one of the most popular options is the macaroni stuffed with black truffle, artichoke, and duck foie gras, and then topped with aged Parmesan

Epicure has earned a Michelin rating of three stars, which is the highest possible rating a restaurant can earn. In fact, it’s one of 132 restaurants throughout the entire world that earned this honor in 2021 so you know the quality is exceptional. 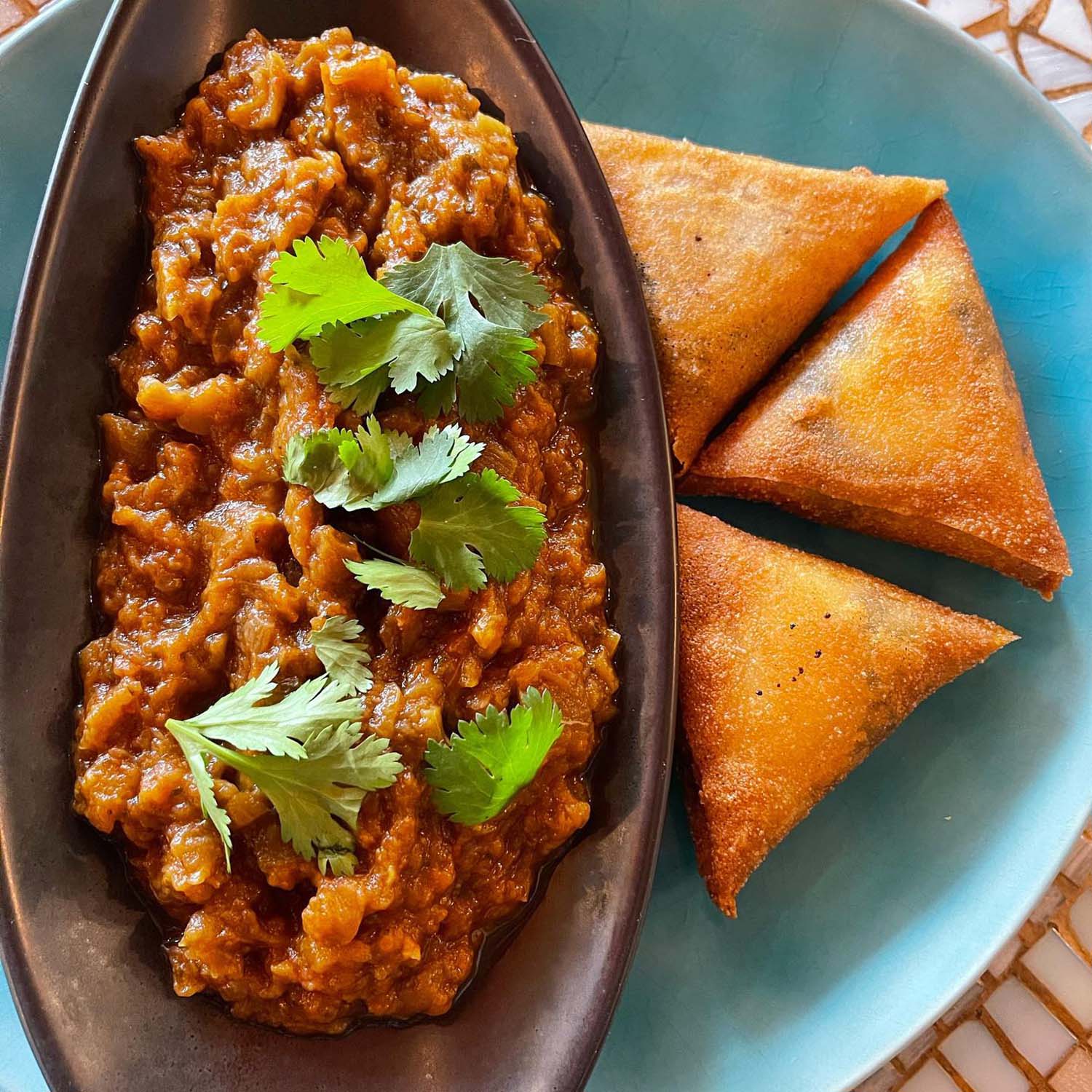 Le Tagine is a Moroccan restaurant that’s often overlooked by tourists as it’s not typically included on guides to the best places to eat in Paris. But it definitely should be! The menu includes couscous and tagine, which is a North African dish named for the earthenware dish it’s cooked in.

Tagine is a type of stew that usually includes meat, vegetables, and spices like ginger, saffron, paprika, and turmeric. La Tagine has several different varieties of the dish available and while they’re all good, I recommend the Agneau Olives Citrons Confits which includes candied lemons and olives!

Any of the fresh seafood dishes

There is a lot of great seafood that you can find in Paris, so if there’s a seafood restaurant that’s known to be one of the best, you know it’s got to go above and beyond. And Clamato does.

Located in the 11th arrondissement, Clamato offers a rotating menu because they always use the freshest fish in their dishes.

While that means you might not know exactly what the menu will look like before your visit, you’ll know that everything there is made with the best possible ingredients.

As Paris is an absolute dream for a foodie like me, I know this list will always be growing as I find some amazing new restaurants to try.

There are so many new eateries popping up all of the time and it’s hard to know which one to try next, so let me know if you have any recommendations.