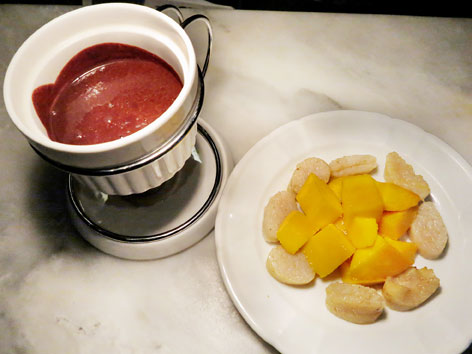 What: Suman (“soo-man”), or suman malagkit (“mah-lag-kit,” meaning sticky), is the Manila rice-cake cousin of Cebu’s budbud pilit (see entry) and the most basic of kakanin (roughly translating to “things to eat or nibble”) that use rice or root crops as a base. Generic suman is made with glutinous (sticky) rice cooked in coconut milk, wrapped in leaves, and then steamed. There are as many types of suman as there are major towns in the Philippines: Just add or change one ingredient (sugar, ginger, salt), swap the type of leaf it’s wrapped in (banana, palm, bamboo), alter the style of wrapping (coconut shells, bamboo tubes), and you will get yet another suman variety. The name invariably changes, too, according to a key ingredient, its wrapper, or its origin. Suman’s regional cousins include China’s zongzi and Japan’s chimaki; it likely came about when ancient Chinese brought rice over and started cultivating it in the archipelago.

Most suman are “handy” snacks—although sticky and perhaps gooey from any added sauce or topping, they are usually individually wrapped in leaves and ready to be eaten on the go. Traditionally consumed without plates or cutlery, a restaurant will typically open the leafy wrapper for you and place it on a plate, or serve it in rows on a buffet table with wilted banana leaves as tablecloth. Suman are considered traditional fare for breakfast or merienda (afternoon snack time), but also work well—as we found—as a fancy dessert, fondue pot and all.

Where: When the rest of the world is on holiday, it seems that Café Adriatico (1790 M. Adriatico St., facing Remedios Circle, Malate, Manila, map) is always open. It calls itself a café, but it’s more a casual dining place, serving a roster of traditional and contemporary Filipino dishes.

When: Open 23 hours every day; closed from 5am-6am

Order: Pictured is the Chocolate Eh! Fondue (Php 295), the restaurant’s signature take on the classic Filipino set of suman, mangoes, and chocolate. The suman and mango both come peeled and cut intocubes, and the gooey fondue of milk chocolate uses tablea, the closest thing to pure chocolate from the cacao tree (see also: sikwate in Cebu). The suman itself was soft, sticky, subtly sweet, only mildly coconutty—by itself, it might have become boring after a few cubes, but paired with the mangoes and chocolate, the suman was the perfect foil for the intensely sweet fruit and the slightly bitter chocolate. Altogether, this dish was a dream. We also indulged in another type of suman, suman sa lihiya (Php 129), presented as a triangular shape of gooey, sticky rice flavored with lye and covered in a caramel-like sauce called latik (derived from boiling coconut milk and raw sugar). Delicious!

Alternatively: Cabalen (632-728-2930; multiple locations including McKinley Pkwy, ground floor of Market! Market!, Bonifacio Global City, Taguig, map) serves a small selection of suman, as well as kakanin and other desserts, as part of its buffet offerings. If you want a variety of suman to try at your leisure, head to the Legaspi Sunday Market in Makati (Legaspi Carpark, Legaspi St. at Herrera St., map) for breakfast or brunch (open 7am-2pm), or try the Salcedo Community Market (Jaime C. Velasquez Park, Salcedo Village, Makati, map) on a Saturday morning. Other places to hunt for suman are at the stalls around the Fiesta Foodcourt of Market! Market! on McKinley Parkway at the Fort BGC (028867519, Taguig, map) and at Tiendesitas (026355680; Ortigas Ave. at E. Rodriguez Ave., Pasig, map). Walking around the metro area, you might spot a random vendor hawking suman at a street corner under a brightly colored umbrella—look for leaf-wrapped suman piled on flat woven trays—so keep your eyes peeled.

Good to know: Most suman will keep for a few days if refrigerated. To revive it, just steam again over boiling water.