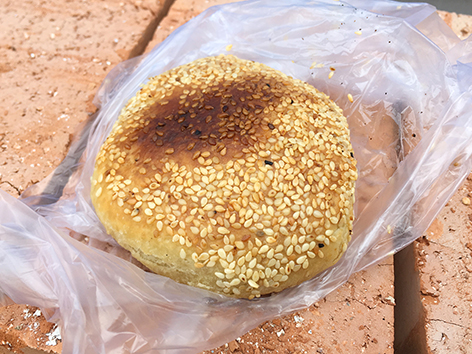 What: While many of Beijing’s restaurants today serve diners a bowl of white rice to go along with their meal, this is a relatively new phenomenon on Beijing dinner tables. For centuries, locals here, as in many parts of northern China, wheat has provided the staple of the city’s diet, shaped into dumplings, noodles, and a variety of delicious baked flatbreads. The two most common are shaobing and jianbing, while dalian huoshao is a unique local variety you’re unlikely to find anywhere else in China!

Eaten alone or alongside any number of main courses, shaobing (烧饼) is a round, usually fist-size biscuit, coming in a wide range of shapes and sizes. The Beijing variety tends to be smaller, with a crispy outside and a flaky inside, peppered with sesame seeds on top. Some bakers give their shaobing a heavier taste by adding black sesame paste to the batter, while others throw in a pinch of cumin and pepper for an extra kick.

Another bread-based snack you’re likely to see a lot of is jianbing (煎饼). Made to order at streetside carts and takeout windows, it’s popular as a quick meal for people on the go, particularly for breakfast, and watching a jianbing get made is a simple pleasure that never gets old. The vendor pours the batter onto a wide circular hot plate, spreading it out with a special T-shaped fork before cracking an egg and sprinkling sesame seeds, cilantro, and chives on top. The resulting flatbread is somewhere between a tortilla and a crepe, topped with lettuce and crispy fried wontons before being folded into a little envelope, all ready to eat.

Less common but no less delicious are dalian huoshao (褡裢火烧), named after the small town to the east of Beijing from which they originate. Another flatbread wrap, it’s thicker and flakier than jianbing, and lightly fried in oil, giving it a hint of a buttery taste. The stuffings are more substantial as well, with vegetables, pork, and occasionally goat meat as popular choices.

Where: Shaobing and jianbing can be found just about anywhere in Beijing, often sold side-by-side out of the same small little shop. One of our favorites is Liu Ji (刘记), quite literally a hole in the wall, squeezed between two clothing stores (192 Andingmen Nei Dajie, 安定门内大街192号, map).

Order: The Andingmen shop sells its shaobing for 1 RMB each. They also have some pretty good tang huoshao for the same price.

If you want to give dalian huoshao a try, check out the aptly named Dalian Huoshao (褡裢火烧) restaurant at 143 Dongsi Bei Dajie (东四北大街143号, map), just north of the Zhangzizhonglu (张自忠路) subway station.