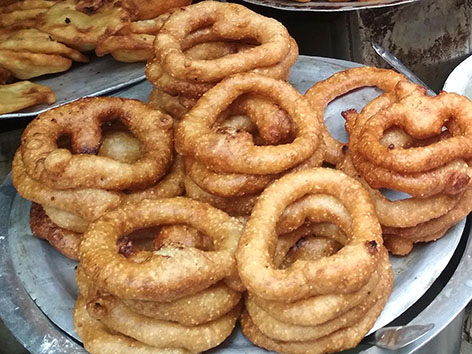 Sel roti are sometimes called Nepali doughnuts because they are rings of sweet, deep-fried dough. However, we think doughnuts aren’t the best comparison: Sel roti are only slightly sweet, and the ring is much thinner, so there’s more crunch to them than the average doughnut. Moreover, they’re made from rice flour (often also mixed with other flours, like millet, buckwheat, or maize), which gives them even more crispness. They are traditionally a celebration food, served as part of a wedding feast or on platters of food during religious festivals like Tihar (the festival of light). Sel roti are not specific to any one ethnic community, and can be found frying in large vats of oil along many lanes in the older parts of Kathmandu. They are a popular snack food, often eaten with tea for breakfast. While they do resemble doughnuts, we find them to be more substantial and slightly more “sensible”—if deep-fried—as a breakfast food!

Where: We found the pictured sel roti at the Banglamukhi Delight, a small fried-food snack stall in old Patan, opposite the Image Ark gallery (Swotha Rd., Patan 44600; map). This spot sells other deep-fried items too, like potato fritters and samosa.

When: Daily, roughly from dawn till dusk

Order: These sel roti (Rs 20) made for a good breakfast snack alongside a cup of sweet, hot masala chia. (And yes, it’s “chia” here, not chai, and is pronounced as such: “chi-ya.”)

Alternatively: Many such nameless (or named by word-of-mouth only) stalls can be found all over Patan, as well as other traditional parts of Kathmandu, including Asan, Kirtipur, and Bhaktapur. Keep your eyes open for vats of oil!

What to Pack for San Francisco (& what NOT to)