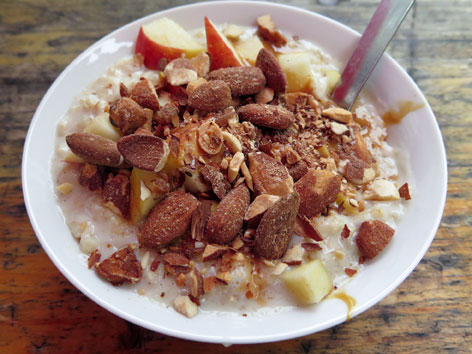 What: Porridge—the traditional, ideal hot breakfast for “common folk” everywhere, nutritious and cheap—isn’t inherently Danish, but it has long been an everyday kind of dish here, typically using grains like rye, oats, and barley. The former, for instance, is found in øllebrød (roughly, “oo-le-buhd”) a porridge dating back centuries that many a modern Dane grew up eating (it’s a commonly fed to babies, even); it’s made with leftover rugbrød (rye bread) and beer, and served with milk or whipped cream.  Then there’s risengrød, a traditional Christmas porridge made with rice—a special-occasion grain back in the day, when rice was an imported specialty product—that’s still eaten today around the holidays. Of course, these sorts of dishes tend to be cooked at home, so when a cool new “porridge bar” opened in Copenhagen back in 2011 with the mission to show the world how tasty the gruel of yore can be, it was hard not to take note.

Where: On the hottest street in newly hipsterfied Nørrebro, Grød (multiple locations including the original at Jægersborggade 50, map) is a cozy hole-in-the-wall with a chalkboard-scrawled menu and a few long picnic tables out on the sidewalk. Porridge is the name of the game here (and what the eatery’s name literally translates to), but savory variations on the theme—risotto, daal, congee, “barley-otto”—are also offered starting at 11am. The tiny, rustic space inside is stocked with for-sale pantry items like spelt flour, risotto, granola, and cookbooks.

Good to know: Among Grød’s ever-expanding porridge empire is a location inside the wonderful Torvehallerne market.

Order: The menu changes every month or so, and during our visit we were bummed to learn its take on ollebrød wasn’t yet available (it generally is offered during the colder months). Fortunately the restaurant’s signature oat porridge, havregrød, is nearly always on the menu (45 kr), and it didn’t disappoint (pictured). It’s usually offered two different ways; ours is topped with homemade dulce de leche, fresh apple, and roasted almonds, cooked in half water and half whole milk. This tastes like comfort-food heaven—a caramel apple in hot cereal form. Delicious! We also loved the spelt porridge (speltgrød) with bananas, hazelnuts, and freeze-dried berries, cooked in water and soy milk. Note that Grød has gluten-free porridges too, made with quinoa or oats, as well as the Icelandic yogurt skyr, should you crave something more cooling.

Alternatively: Porridge doesn’t show up on too many menus, but we did love chef Bo Bech’s take on ollebrød at the excellent Geist (Kongens Nytorv 8, map), where Nordic ingredients are incorporated into a creative, wildly delicious à la carte menu of small plates. The ollebrød (pictured here) shows up on the dessert menu, pooled in a small mountain of soft, tiny blackberries (brombær), served over crème fraiche. The porridge’s flavor was super concentrated, the rich, malty, slightly sour taste of the rye combining beautifully with the sweet, ripe fruit. We fell in love with the dish—but we’re guessing traditional ollebrød isn’t nearly so fancy. You can always try your hand at home with a bag of instant ollebrod from the grocery store.