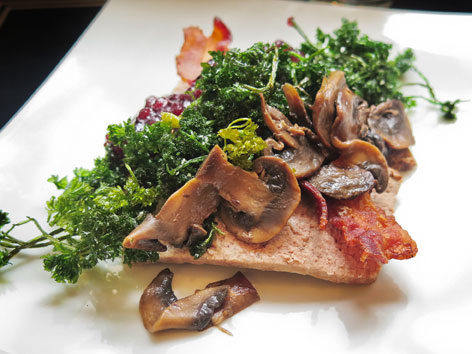 Danish pork liver pâté, or leverpostej (“lew-er-pos-dah”), made with liver, lard, and onions, is everywhere in Copenhagen, in groceries and on just about every smørrebrød (open-faced sandwich) menu in the city. Said to have been introduced by a Frenchman in the mid-1800s, back when it was hand-minced and quite expensive, it is, in its most basic iteration, layered atop rustic rugbrød (rye bread) over a smear of lard or butter, topped perhaps with sliced cucumber or beetroot; fancier smørrebrøds will pair the liver with mushrooms and bacon. The good stuff is to die for, and most definitely worth seeking out.

Where: We tasted a few variations of leverpostej in town, some quite run-of-the-mill and some absolutely delicious. We found that iconic smørrebrød restaurant Ida Davidsen (Store Kongensgade 70, map), more than a century old and famous for its 250 imaginative varieties of smørrebrød, had, far and away, the best leverpostej we tried in Copenhagen, by a million miles. Er, kilometers.

Order: The leverpostej smørrebrød (75 kr) is a pile of goodness atop a buttered slice of rye: pork liver, mushroom, bacon, cranberry jam, and a neat pile of crispy fried parsley. It proved a winning combination of components, bringing in some salt and sweetness, the softness of the liver, and the crunchy parsley. The liver itself was so buttery-smooth, it tasted as if it were whipped. This is a plate of food that disappeared quickly—and there’s 249 other things to try here. We’ll definitely be back!

Alternatively: There’s no shortage of this stuff in Copenhagen. Try a good smørrebrød restaurant (keep in mind most are lunch-only)—among the best are Schønnemann (lunch only; Hauser Plads 16-18, map), which has a veal leverpostej with mushrooms and bacon, and Told Og Snaps (Toldbodgade 2, map); the more budget-minded might consider a takeaway spot like Rita’s Smørrebrød (Fælledvej 11, map), offering liver a few different ways starting at just 12 kroner a piece—or hit up a brunch buffet like that at Restaurant Sult (inside The Danish Film Institute (Filmhuset), Vognmagergade 8 B, map), which always includes some warm leverpostej with mushroom.