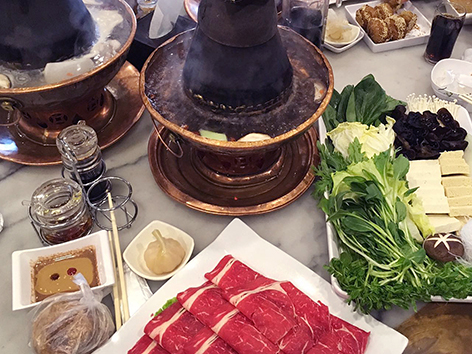 What: A popular meal throughout China, the most common variety of hot pot, or huoguo (火锅), originates in the balmy southwestern province of Sichuan, famed for its hot and spicy flavors. Diners choose a selection of vegetables, meats (usually limited to beef and lamb), and occasionally seafood, all served raw, which you then cook yourself in a boiling broth inside the large copper pot that gives the meal its name.

Beijing, however, boasts its own variety of hot pot, hailing not from Sichuan but from the frigid plains of Manchuria and Mongolia to the north. While Sichuanese consider hot pot a summer occasion, believing the steam and spices encourage sweating to keep the body cool and remove toxins, Beijing’s hot pot–or shuan rou (涮肉)–is all about keeping warm in the winter. And while most hot pots are warmed by an electric hot plate below it, shuan rou is cooked the old-fashioned way, in a doughnut-shaped pot encircling a miniature coal-burning stove, with the smoke billowing out of a tall cone chimney in the middle. The fun of eating from such a contraption alone makes shuan rou an experience worth trying!

As opposed to spicy Sichuan hotpot, the flavors of shuan rou come from the dipping sauces. In most restaurants, diners can choose from at least a dozen choices of condiments and spices, though no true Beijinger would think of going without sesame sauce (zhima jiang, 芝麻酱), chives (cong, 葱) and cilantro (xiangcai, 香菜).

Where: Located in the center of the Muslim neighborhood of Niu Jie, Jubaoyuan (聚宝源, 5 Niu Jie, 牛街5号, map) is a Beijing institution. Its well-worn marble tabletops add a touch of class inside an otherwise sparsely functional dining hall–but it’s the forest of smoking brass chimneys at every table that defines the atmosphere. It can almost leave you feeling like you’re eating in a sauna during the lunchtime rush.

When: Daily, 11am-10pm. Jubaoyuan is famous as much for its food as for the long lines of hungry diners waiting for a table every weekend.  It’s best to come for a late lunch or early dinner.

Good to know: Couples may have better luck than large groups–as they call out numbers, listen for the words “pin zhuo,” which means they’re looking for one or two people to join an almost-full table.

Order: Start by choosing your broth, with varying levels of spiciness available (ranging from 8 RMB-35 RMB). Then go on to add what goes in the broth. We tend to go with a plate of beef (42 RMB) and the vegetable combination platter; the small size (18 RMB) is more than enough to feed two people. Don’t forget to order a side of shaobing (2 RMB each)–with their unique round shape and spicy flavor, some locals claim they’re the best in the city.

Alternatively: Another popular spot with multiple locations, Dong Lai Shun (东来顺) provides a convenient and probably quicker alternative for those looking to try shuan rou from a well-known local establishment (multiple locations including 7 Dashilan Jie, 大栅栏街7号, map). One of the most popular spots for Sichuan-style hot pot is another chain, Haidilao (海底捞, 109 Xidan Dajie, 西单大街109号, map)–it’s open 24 hours a day and is known to offer snacks, shoeshines, and manicures for customers waiting outside during peak hours.