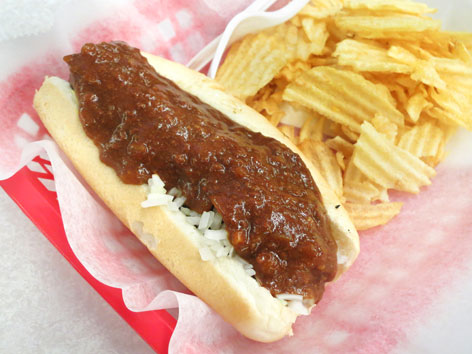 What: This natural-casing smoked sausage, typically half-pork, half-beef, and flecked with red pepper, is D.C.’s culinary claim to fame, among the city’s very few true signature foods. Its name may come from its half-and-half mix of meat—which doesn’t account for the fact that all-beef half-smokes do exist—or from the way they’re usually split in half on the grill; for the most part, though, the etymology remains a mystery.

Among the half-smoke’s trademarks are its generous brat-like girth; its coarsely ground, subtly spicy meat; and its tendency to show up everywhere in D.C., whether wrapped in a steamed roll and messily piled with diced onion, mustard, and chili; grilled and served alongside eggs at breakfast; or fancified and paired with craft beer. The first method remains the most common, and best-loved. You cannot leave D.C. without trying this.

Good to know: According to Washington City Paper, the first half-smokes were likely made by Raymond Briggs of D.C.’s Briggs meatpacking company, around the 1930s. Sadly, once Briggs sold the company a few decades later, the sausages’ quality tanked, and the Briggs name is no longer worth anything to half-smoke connoisseurs. A good brand to look for today are those coming from Manger Packing Corp. in Maryland.

Where: An institution since 1958, Ben’s Chili Bowl (multiple locations including the original at 1213 U St. NW, map) attracts all walks of life—locals, tourists, politicians, the rich and famous, drunks, you name it—and its half-smokes are damn good. Celebrity photos line the walls; in fact, it was Bill Cosby who put Ben’s on the map in the first place, once he began frequenting the place in the 1960s. Famously, only Cosby and the Obama family are on the restaurant’s “who eats for free” list.

Order: A chili half-smoke ($5.95), a quarter-pound, natural-casing tube of coarsely ground pork and beef grilled to perfection with a crispy, blackened skin; topped with yellow mustard, chopped onions, and a blanket of spicy homemade beef chili; and wrapped in a warm steamed bun. It’s not cheap, and it shouldn’t be: This is a thick, meaty, quality sausage here (it’s said to be a secret recipe from Manger Packing Corp.). Interestingly, Ben’s doesn’t split its half-smokes on the grill; co-founder Virginia Ali told Eater she believes they dry out that way. Whatever they’re doing, they’re doing right: We loved the snappy pop, the crunchy onions, the spicy kick. And it comes with potato chips.

Alternatively: You don’t have to go far to find a D.C. hot dog cart selling cheap half-smokes, but keep in mind those are typically casing-less and made of gelatinous emulsified meat, more like a regular old hot dog. There’s another iconic spot for real half-smokes in this area, but it’s in Arlington, Virginia: Opened four years before Ben’s, in 1954, Weenie Beenie (703-671-6661; 2680 S. Shirlington Rd., Arlington, map) has also been in the half-smoke game for six decades and counting, and likewise use sausages from trusted brand Manger; a half-smoke “all the way” includes chili and a runny egg. Its name has been immortalized by the Foo Fighters’ song “Weenie Beenie” (frontman Dave Grohl partly grew up in the D.C. area).