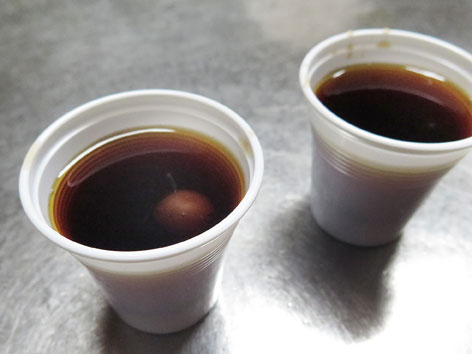 << back to foods in Lisbon

What: This Lisbon-born liqueur—called ginja for short—combines macerated sour cherries with brandy and sugar. It’s served straight up in little cups, with (com) or without (sem) an alcohol-soaked cherry (called ela, or ginja) or two plopped in (the cherries, we’ve read, usually come from central or northern Portugal). Sweet and sticky, but with a kick, ginja is beloved by visitors and Lisboetas alike—you’ll often see students hovering nearby, no doubt attracted to the shot’s cheap cost. It’s considered an aperitif or a digestif … but we think it works just about anytime you’re passing by.

Where: A tiny open-fronted bar that spills onto the street in Praça do Rossio, Lisbon’s touristy central square, historic A Ginjinha (Largo São Domingos 8, map), aka Ginjinha Espinheira (among other names for it), is a no-brainer for anybody walking by. It’s the oldest ginjinha maker in the city, established in 1840 by a Galician monk named Francisco Espinheira, whose name still graces the bottles (he’s credited with inventing the stuff). The biggest tipoff that ginjinha is nearby? The sidewalk outside is littered with spit-out cherry pits.

Order: A ginja, or three (€1.40). Do try the brandy-soaked cherries, but don’t swallow the pits! If you like it, you can buy a souvenir bottle here for about €11.

Good to know: If you’re traveling to pretty Óbidos, you can try ginjinha served in an edible chocolate cup, a popular treat there.

Alternatively: Another historic hole-in-the-wall, established in 1890, is just around the corner: Ginjinha Sem Rival (Rua Portas de Santo Antão 7; map), “ginjinha without rival.” There you can also try a shot of the sweet, strong herbal liqueur Eduardino, named for an Italian clown who apparently used to come here to mix up his own alcoholic concoction. More off the tourist path, try the tiny ginja tavern Os Amigos da Severa (Rua do Capelão 34, map), nestled into a picturesque Mouraria alleyway.