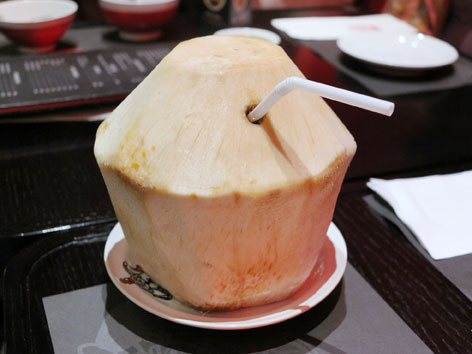 What is buko and buko juice?

Buko (“boo-koh”) refers to a young, immature green coconut, and also to their meat. Coconuts are everywhere in the Philippines, and apart from the fruit, the trees are prized for the usefulness of their various parts: the leaves (used to wrap puso and suman), the wood from the trunk (used as lumber), the heart (called ubod; see lumpiang sariwa), and even the roots (used as dyestuff). The mature coconut fruit is the source of coconut milk, coconut oil, and meat, but the buko is most prized for not requiring any processing—it is an instant drink and snack in a shell, if you can crack the shell open.

Fortunately, if you order buko from a street vendor or in a restaurant, they will expertly split the shell enough for you to drink the water and scrape off the gelatinous young coconut meat inside. Buko “juice” is filling, hydrating, and oh-so-refreshing on a hot day, while the meat has a slightly sweet, delicate coconutty flavor that’s especially satisfying after a big meal.

Where: It may be a Japanese restaurant, but Ikkoryu Fukuoka Ramen (632-809-0333; multiple locations including the ground floor of Building 7 at Bonifacio High St., Fort Bonifacio Global City, Taguig, map) is smart enough to serve fresh buko in its shell.

Order: “Fresh buko juice” (Php 140) is a staple drink on the menu here. It arrived at our table chilled, shell and all. In a typically efficient Japanese way, a hole was neatly drilled through the fibrous exterior and shell, rather than the standard practice of lopping off the top. The hole was just big enough to insert a bendy straw so we could drink the buko juice (as coconut water is called in Manila), an excellent beverage to accompany savory dishes, as it’s cool, refreshing, and just a tad sweet.

Bonus: Toward the end of your meal here, you can ask your server to cut off the top of your buko shell so you can get to the buko itself (the coconut meat). The best buko, we learned, is about 3mm-5mm thick and soft enough to scrape off the shell with a standard dinner spoon. Any thinner and the stuff just disappears into the coconut water; any thicker and it loses its gelatinous texture, making it difficult to scrape off. Great buko practically disintegrates when you press it against the roof of your mouth, and that’s what we found at this ramen restaurant. It made a perfect light and subtly sweet dessert following our heavy meal.

Alternatively: If you’re lucky, you might still find buko being sold from a wooden pushcart, the way they’ve been peddled for decades in the older residential streets of Manila such as the Paco, San Andres, and Malate areas. It is a Herculean task to push a cart full of three-pound coconuts, so do the man a favor and lighten his load. You’ll likely be treated to a “ritual” of the vendor knocking on the coconut with his finger joints—the sound tells him how much meat is in there and whether it’s a good thickness for consumption. Then, depending on your preference, he might hack the husk off with a machete and puncture the shell just enough for you to drink from it, or he can transfer the juice into a clean plastic bag before scooping off the buko into the same bag for you to enjoy later.

Good to know: Buko (the meat) is a versatile food item that’s made its way into various desserts. You get buko-pandan when you mix pandan-flavored (“pan-dan,” screwpine) gulaman with buko. Buko salad is a standard party fruit salad that combines buko strips with canned fruit-cocktail mix and cream or milk. The delicately flavored and textured buko pie uses buko as a pastry-shell filling, and then you have buko ice-lollies, bukayo (“boo-kah-yo,” candied buko), and even halu-halo served in buko, shell and all. If you love coconuts, you will be very happy in Manila!