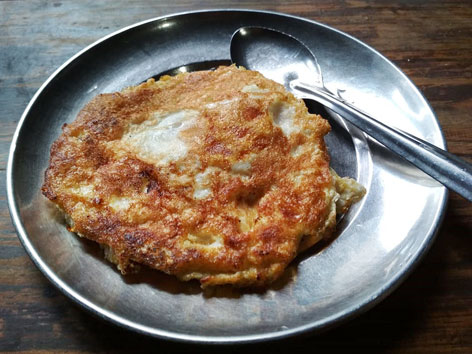 Newari pancakes, anyone? Bara (also called wo, in the Newari language) are thick savory pancakes made from lentil paste; the paste is mixed with spices such as asefoetida, cumin, turmeric, and ginger, which together give the bara flavor beyond just a simple batter. It’s important that the paste isn’t too liquidy; it should be thick, unlike pancake or crepe batter. You can eat bara plain, with a cracked egg cooked into one side, or topped with minced meat; they’re usually served with a fresh tomato pickle and/or a buffalo soup. Beyond just a snack, bara hold significance to the Newari people. On special occasions, they are given as part of a good-luck set of food, called sagun, which also might include chiura, fried boiled eggs, yomari, and a variety of curries. Nicely crisp on the outside and fluffy in the middle, bara are best eaten hot.

Where: Honacha (behind Krishna Temple, Mamaru Galli, Patan, 44600, map) is, quite literally, a hole-in-the-wall behind the stone Krishna Mandir on the Patan Durbar Square. It’s a local favorite, and has been around for more than 60 years. Crouch to enter the dark local eatery, which is always full of people, and perch yourself on a low stool.

Good to know: All versions of bara are cooked on the same well-seasoned grill, so vegetarians may want to steer clear of this dish.

Order: Pictured is the egg bara (RS 55) here: satisfyingly crispy and oily, and quite substantial because of the egg cooked into it. It works alone for a snack, or with piro aloo (spicy potato curry) or sukuti (dried buffalo meat) for more of a meal.

Alternatively: Bara are served practically anywhere that specializes in Newari cuisine. Check out the bara at Newa Lahana (Kirtipur 44618, map) in Kirtipur, one of the most popular Newari eateries in the Kathmandu Valley.