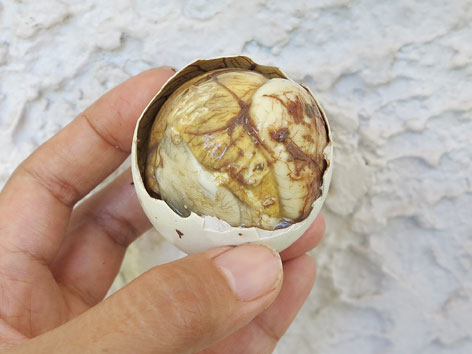 Balut or balot (“bah-loot,” both singular and plural) is a famous Filipino food that tends to either fascinate or revolt foreigners. It is a 16-to-21-day-old fertilized duck egg that contains not only a yolk but also a semi-developed duck embryo. Often hailed as one of the Philippines’ most iconic and exotic delicacies, it is cracked open and eaten with a dash of salt and not much else. Below we’ll tell you more about eating balut—if you like hard-boiled eggs, you’re halfway there!—but first, some backstory.

The truth is, balut is not unique to the Philippines—it also exists in nearby Vietnam, Laos, and Cambodia—and it’s said to have been brought to these shores (once again) by the seafaring, island-hopping Chinese. The name is derived from the idea that when you crack open the shell of a cooked balut, the duck embryo should be “balut sa puti” (literally, wrapped in white). To make it, the duck eggs are brought to the magbabalot (“mag-ba-ba-loht,” balut maker) on the day the eggs are laid. The fertilized duck eggs (determined through candling) are incubated in baskets surrounded by warmed rice husks until they’re ready to be boiled and sold.

Balut from Pateros, a municipality on the eastern end of Metro Manila, is believed to be the best in the country, but you don’t have to travel far to find a good specimen in this city. Vendors used to shout “Baluuuuuuuut!” as they walked the streets or pedaled around, drawing out the second syllable for as long as they could (much like those taho vendors), their warm balut in cloth-covered baskets. These days, the yodeling is more commonly heard on residential streets, and balut vendors can be a bit less itinerant, parking themselves on various street corners, or even replacing the traditional baskets with decidedly less rustic Styrofoam boxes, “balut” written on the side.

Despite the changes, balut remains the favorite snack of overtime workers and night owls, as it’s believed to be high in protein and a healthy midnight snack—excellent recovery food on your way home from an alcoholic binge as well as, some will swear, a good aphrodisiac.

Where: You can eat your balut street-side, or take it home. We found ours on Makati Avenue near the intersection with Jupiter Street (map) and brought it home to photograph later.

When: Balut vendors tend to come out at night. We’re not sure how that came to be, other than that the thought of eating the stuff may be enough to put off the squeamish, so perhaps best to eat it in the dark! Or maybe it goes back to that aphrodisiac thing…

Good to know: The younger the egg, the tenderer (and perhaps more palatable to some) its contents will be. So a 21-day-old egg will have a “white,” or albumen (locally referred to as bato, meaning stone), with a chewy, almost rubbery texture—while edible, this part is usually picked off and discarded—and the beak, feathers, and bones of the embryo will be more pronounced and a bit crunchier than in, say, an 18-day-old egg. (For embryos younger than that, some people opt to swallow the chick whole, oyster style.) The often vein-laced yolk is more velvety than your usual chicken egg—if you’re into eggs, this is a treat.

How to eat balut?

Truth be told, when you eat balut, you don’t pick the contents apart and stare. How do you eat it? Crack open the shell at the narrow end and peel off a small hole in the membrane lining the shell. Sprinkle in some rock salt and slurp out the clear sabaw, or “soup”—this is your appetizer! (Technically, it’s amniotic fluid.) Then peel and eat as you would a hard-boiled egg, and expect a bit more texture. Dipping salt and/or vinegar are added to taste.

Order: One balut (Php 15) is a warm, soup-covered protein packed in a shell. We cracked it at the top and picked off an opening with our fingers, careful not to let all the soup dribble out, then we sprinkled a pinch of rock salt in and—bottoms up! The few slurps of soup were quite savory and flavorful, a bit gamier than a clear chicken soup might be. Once we finished the soup, we peeled back more of the shell, sprinkled on more salt, and chomped down.

How does balut taste?

If the one you get is as good as ours (which was 18 days old), the yolk will be appropriately chalky but moist, the white will be chewier than that of a regular hard-boiled egg (again, many opt not to eat it), and the embryo not unlike the tendon bits of a very well-boiled chicken. (Think of eating the spines of canned sardines, but softer.) That’s all there is to it, folks. Quite a tasty mix of flavors and textures, and certainly worth a try.

Alternatively: If you’re already in the Makati or the Fort Bonifacio Globak City area (Taguig), head on over to Pateros and use the San Roque Church (built in 1815, map) as your waypoint. This is practically the center of town, where everything happens. Poke around from there and you will definitely spot a shop, stall, or sidewalk vendor selling balut.

We’ve not had a chance to try balut’s other incarnations, but we’ve heard that Elias by Crisostomo (7th Ave. at 30th St., Bonifacio High St., Taguig City, map) has concocted a “Bravo de Balut,” three to four whole baluts served on a sizzling plate with sauce and lots of garlic.

Finally, if you are utterly squeamish about balut but don’t want to be too left out, ask the balut vendor for penoy (“peh-noy”), which is a duck egg that failed to develop into balut. When you crack the penoy open, its entire contents will be a velvety, light yellow yolk that is only slightly gamier than chicken-egg yolks. Penoy has no egg white, so if you love yolks, you’ve just struck gold.