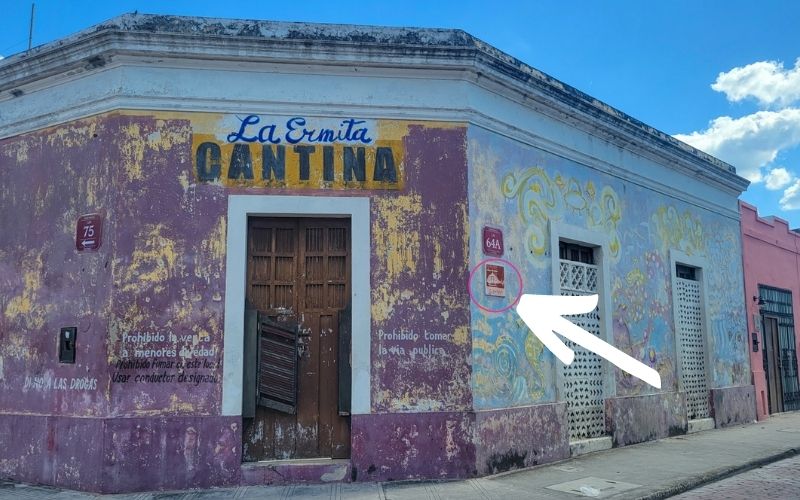 
In an effort to bring you some new voices on Ottsworld, here is a guest post from traveler Vicki Hill. Vicki is a good friend of mine who traveled with me to Merida Mexico. It was her first trip to Mexico and her excitement for the culture was infectious. Like the great curious traveler she is, she accidentally found one of the coolest and little-known stories in Merida so I asked her to write about it! All opinions, experiences, and photos here are hers. – Sherry

On my first day in Mexico, I walked through the narrow streets of Merida’s historic center alone, happily taking in all the new sites and sounds. There were so many! Brightly painted boxy houses-pink, blue, green and yellow- built so close to one another but mixed in with bakeries, taquerias, small convenience-type stores and shops. I watched motorbikes, buses, vans, tiny cars & bicycles flying by on uneven brick streets. And I passed so many friendly welcoming smiles & greetings from the locals.

But on that very first stroll towards the square, my eyes spotted a dark red and white stone plaque; mounted up high on the corner of a building. I quickly crossed the street, noticed the Spanish word for the picture engraved on the stone & took a photo. This would become my crazy obsession for the duration of my time in Merida. My traveling companions can attest that I was always shouting, “Hey, I’ll catch up,” as I rushed across the streets to every corner where I spotted these carved plaques. I was so curious to learn about them.

We had a wonderful tour with Raul from Tours by Locals on our third day in Merida. And I couldn’t wait to ask him about these fascinating pieces of art stuck on so many corners. He called them Stone Plates.

Finding Your Way Around the Merida Historic Center

When the Spanish conquered the former Mayan City of T’ho, they structured all the streets in a perfect square grid. Not by any names, just numbers—North to South even numbers; East to West street named with odd numbers.

So, the corner you wanted to find or meet at might be at 65 & 42. It might seem pretty easy to navigate now, but it was confusing to many at the time in the newly built city. To help those who didn’t understand or couldn’t read, they would use corner landmarks to describe where a specific location was—like “by the bronze statue” or “near the two-faced mural,” etc.

Corner shop owners began to name their businesses after people, places, events, or animals to make it easier to navigate the city. And before long, business owners sought out corner buildings because they were easy to locate.

But, over time, a lot of these corner landmarks disappeared. Then, the city government began making the Stone Plates of red and white plaster, placing them on corners throughout the city. Some of the plates are very old, and some are more recent, but both old and new keep the history of the city corners alive. And, it seems, each plate has a story, event, or legend behind it…or had one. It was difficult to find much information about these little pieces of art, but here’s a tiny taste of their history.

On the corner of Los Dos Camellos” (the two camels) is the story of a Lebanese immigrant who brought a pair (male and female) of camels here with the hope that they would reproduce, but without success.

“El Polvorín” (powder keg) is where an explosion happened in a gunpowder warehouse.

The legend of the “La Tucha” (a monkey) is that a beautiful young rich girl was turned into a monkey for being too rude.

And, on the corner of “El Loro” (the parrot) is the tale about two old ladies that owned a blind parrot. When it died, the woman replaced it with a parrot statue. So, everyone referred to ‘the corner of the parrot”.

And the one plaque (& statue) I was unsuccessful finding (but it wasn’t without trying!) is the story of “El Elefante” (the elephant). Dating back to the 1830s is an elephant statue on top of a roof placed by the business owner to make his place stand out. The plate is of an elephant & it’s the name of the corner.

Some plates are named after local trees such as “El Tamarindo” (the tamarind), “El Limón” (the lime) or “El Almendro” (the almond). There are many plates with animals pictures like “El Venadito” (the little deer), “El Pato” (the duck), “Los Dos Toros” (the two bulls). Some reflect the weather like “El Huracán” (the hurricane), “El Ciclón” (the cyclone).

The Unknown Stories – A Reason to Go Back to Merida

But there are many I found names for, but no stories and I would love to know their history: “El Chévere” (The Cool Guy), “El Salto de la Pulga” (The Jump of the Flea), “El Besito” (The Little Kiss), “El Mono Suelto” (The Free Monkey), “La Chaparrita” (the short woman), and “El Imposible” (the impossible).

But the one that had us all stumped was “El Autogiro” (the helicopter). This one couldn’t be very old and I want to know its story!

In my research, I found the number of plates ranging from 170 to over 600—I’d guess the first number is closer; the historic center is not that big. They are not on every corner, but as I walked and walked throughout my week in Merida, my eyes were always drawn to the corners, searching for plates.

I ended up taking shots of 33 Stone Plates…all way above my head, usually taken in a rush & some at night. It was definitely an unexpected part of my trip to Mexico, but one I truly enjoyed, and it’s been fun to find out more about this part of Merida’s history.

About the Author:
Vicki Hill is an avid solo car camper and hiker. She has shared her wonderful tips in this article – How to Solo Car Camp – here at Ottsworld. And you can her on the Jump Podcast here. In addition you can follow her travel journal – Trip Scribbles and @vik.hill on Instagram